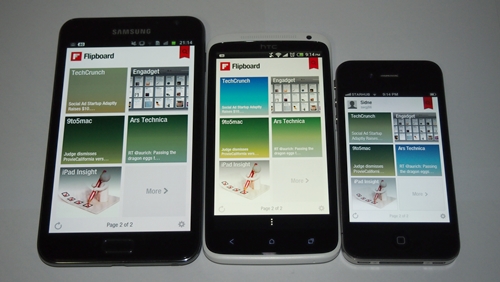 According to TechCrunch, the 2.32MB APK should install on any Android device. The downloading and installing process can be completed in a few steps. All you need to do is to access the XDA forum here on your phone's browser, download the .apk and install it. The whole process only took us a couple of minutes to download and install on the Samsung Galaxy Note and HTC One X.

Our initial impressions were very positive. Flipboard ran quite smoothly on both devices although the viewing experience was definitely better on the Samsung Galaxy Note due to the larger 5.3-inch HD Super AMOLED display. Valcho's next mission is to extract the Samsung S Voice .apk and make it available for non-Samsung Galaxy S III users.

The hacking attempt is not the first we've encountered. When Apple launched the iPhone 4S with Siri, developer Steven Troughton-Smith was quick to jailbreak the phone and port the proper files for Apple's servers to authenticate requests from an iPhone 4, thus ending the exclusivity of Siri to the iPhone 4S.

Join HWZ's Telegram channel here and catch all the latest tech news!
Our articles may contain affiliate links. If you buy through these links, we may earn a small commission.
Previous Story
Sharp Corp Unveils Trilingual Vacuum Robot
Next Story
Zotac Presents Its Amplified GeForce GTX 680