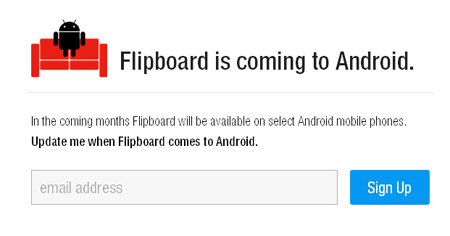 Flipboard, an app that collects content from social media and other websites and collates them into a magazine format, has always been an iOS-exclusive app. However, it seems the app is no longer exclusive to Apple's ecosystem as it was spotted on Samsung's new flagship mobile phone, the Galaxy S III (for our hands-on on the Galaxy S III click here).

Samsung has stated that Flipboard will be exclusively found on the Galaxy S III for the moment, though it will hit the Google Play store in the future. No news on when exactly will the official Android app appear on the Play Store, though it is stated on Flipboard's Android page that the app will be "coming to select Android mobile phones". This could mean that the app will only work on devices running on a particular Android OS version and above (like Android 4.0 for example). For updates, do sign up on their page here.

The SlashGear crew have already given the app a spin, and it seems that it's very similar to the iOS version with the option to link different news feeds to the app as well as linking your social networks. And unique to Android, it also allows for a widget to be placed on any of your home screens.