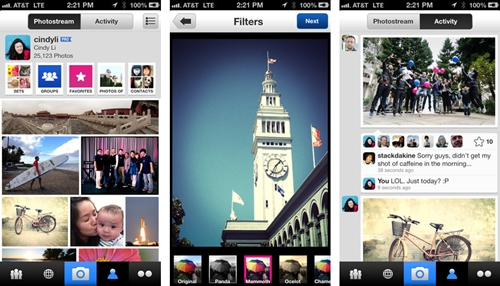 Just two days after Twitter launched eight photo filters and Instagram's major update, Yahoo has released version 2.0 of its iPhone Flickr client, one that features a revamped US and 16 new photo filters. This update will incorporate features that web users are accustomed to, including photo editing powered by Aviary and the socially-driven "Groups" function. The Android version has long since saw these updates way back in August and unsurprisingly, the redesign for its iOS counterpart draws heavy influences from the former. To add on, users can now access the Flickr app with numerous accounts including Facebook and Google and share them across  Facebook, Twitter, Tumblr or via email.

Does this have something to do with the appointment of Yahoo's new CEO, ex-Googler Marissa Mayer and her new focus on mobile? According to MacWorld, yes:

MacWorld - "This is the second major revision to an app that Yahoo has released in as many days; on Tuesday, the company rolled out a revamped Yahoo Mail for iOS, Android, Windows 8, and the Web. It’s hard not to attribute this renewed focus on key consumer-facing products to Yahoo’s new CEO, Google veteran Marissa Mayer, who took over in July.

Shortly after she took the job, an Internet campaign sprung up, asking her to “make Flickr awesome again”; with Thursday’s update, it seems like she might have taken that plea to heart."

The new Flickr app is available for free on iPhone but unfortunately, an iPad version is still absent from this update. Nonetheless, there's Snapseed, a photo-editing app that has a version optimized for iPad users, which has also been recently made available for the Android platform.

Join HWZ's Telegram channel here and catch all the latest tech news!
Our articles may contain affiliate links. If you buy through these links, we may earn a small commission.
Previous Story
HP Announces Availability of its OfficeJet 150 Mobile All-in-One Printer
Next Story
Sales of Nexus 7 Set to Hit Over One Million Units in December