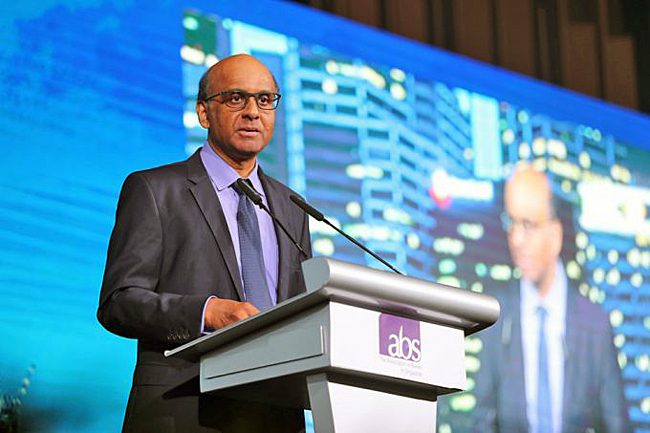 This article is contributed by Jamie Lee and a version of it first appeared in The Business Times, an SPH publication, on June 29, 2019.

Singapore will issue up to five new licenses to digital banks and begin taking applications from August, in one of the biggest liberalization steps taken by the city-state in years.

The maximum of five new digital-bank licenses to be issued in time will comprise up to two digital full-bank licenses, and up to three digital wholesale bank licenses. They must all meet the same capital requirements as local banks.

This was announced on Friday night by Senior Minister Tharman Shanmugaratnam, chairman of the Monetary Authority of Singapore (MAS), at the annual Association of Banks in Singapore (ABS) dinner.

"The new digital bank licenses mark the next chapter in Singapore's banking liberalization journey, I am confident that (the local banks) will hold their own against the new competition."

The digital full-bank license will allow licensees to provide a wide range of financial services and take deposits from retail customers. A digital wholesale bank license will allow licensees to serve SMEs and other non-retail segments. The aim, BT understands, is to tackle the segments that may be underserved, such as small businesses. This is done without compromising the anchoring position of the local banks, which hold a significant market share collectively, to prevent systemic risk.

BT also understands there have been informal talks with potential applicants - from both Singapore and overseas - that are keen to tap this new licensing framework. Applications for the digital full-bank licenses are open to companies headquartered and controlled by Singaporeans. Foreign companies can apply for these full-bank licenses if they form a joint venture with a Singapore company. Applicants must have a track record in operating an existing business, or in technology and e-commerce fields. They must also show clearly how they can tackle unmet needs, and show they have a sustainable digital banking business model. Any competition deemed to be "value-destructive" will not qualify.

MAS will look at the financial projections from the applicants such as cost-to-income ratio, and projected net interest margin. At the first stage, the digital non-wholesale bank - that is, the digital full bank - will operate as a restricted bank. This restricted digital full bank will have an initial paid-up capital of S$15 million. Aggregate deposits will be capped at S$50 million and individual deposits will be capped at S$75,000.

To add, the bank can only accept deposits from a small group of persons such as business partners, staff, and related parties. With that, it will have to participate in the deposit insurance scheme, which protects deposits of up to S$75,000 per depositor in the event of the bank's failure. Such a digital bank - at its restricted stage - can only offer simple credit and investment products. It cannot offer complex investment products such as structured notes, and cannot engage in proprietary trading.

It will also be restricted in banking operations in no more than two overseas markets, and must be incorporated in Singapore. Its liquidity requirement will stand at 16 per cent of minimum liquid assets.

Once MAS deems that the restricted digital full bank performs to show, among other things, good quality of loans, and a well-managed business, the restricted digital full bank will be graduated to a full functioning digital bank by the regulator. No timeline has been set by MAS on this. But at that point, a graduated bank will need to meet the minimum paid-up capital requirement of S$1.5 billion, and face the same liquidity requirements as local banks, which means a 100 per cent in net stable funding ratio, and 100 per cent in liquidity coverage ratio.

The S$50 million cap in deposits will be increased then, too. The application for up to three digital wholesale bank licenses for SMEs and other non-retail segments is open to all companies - both Singapore and foreign ones. For such applicants, the minimum paid-up capital is S$100 million. They cannot take Sing-dollar deposits from individuals, save for fixed deposits of at least S$250,000. But it can open and maintain business deposit accounts for SMEs and corporates.

This comes as Hong Kong in March opened its doors to virtual banks, with some arguing that it is playing catch-up to the digital banking trend. Singapore - a heavily banked country - has already seen several of the traditional banks here investing heavily in digital capabilities in recent times. The local banks are also fairly well-entrenched, with Singapore's top three banks estimated to hold a combined market share of just over 50 per cent. The market will watch if digital banks - with their nimbleness but a much smaller asset base - will be able to wrest market share from the big guns here.

Hong Kong has already issued eight licenses, with the most recent batch of four given to entities linked to China's top technology companies including Ping An, Ant Financial and Tencent. The earlier batch of licenses went to applicants that are joint ventures between traditional banks and non-bank entrants. These virtual banks in Hong Kong are roughly expected to begin operations in six to nine months.

The MAS said last month that in mulling the licensing of digital banks, it is thinking through how unique their offerings might be, and how potential risks will be managed and contained.

Since 2000, Singapore-incorporated banks have been allowed to set up banking subsidiaries to pursue digital-only business models. But MAS had been reviewing how digital-only banks with a "non-bank" parentage can offer value.

At the ABS dinner, Mr. Tharman noted that the confluence of technology has heralded a basic rethinking of the financial system. But he said MAS has consistently held the view that banking systems need strong anchor players. "The experience of the global financial crisis and its aftermath vindicated our view," adding that the dual objectives of permitting greater competition spurring greater innovation in finance, together with retaining strong local anchors and trust in the banking system, have guided Singapore's past liberalization initiatives, and motivated the country's next moves.

MAS added then that banks have also been working with fintech companies to improve their digital offerings. Many fintechs are loss-making, to be sure, but the large ones are still flush with cash.

Online-only bank Monzo recently closed a new funding round, doubling its valuation to more than US$2.5 billion. Grab, which is reportedly interested in a virtual banking license in Singapore, expects that by the end of this year, it would have raised US$6.5 billion in total capital; this fund-raising would take just all of a year and a half. Remittance startup InstaRem told BT on Friday it plans to apply for the digital banking license. Razer, which makes gaming accessories and has a mobile wallet, also said late Friday night it is considering to apply for this license.

The incoming ABS chairman Samuel Tsien, who is also OCBC's group chief, told the media in response to the latest liberalization move: "We are excited at the possibilities that the new virtual banking license may open up for us. We will study the new framework closely to see how a virtual bank will complement our current businesses."

Mr. Tsien said in his speech at the ABS dinner that while banks have embraced working with fintechs, he flagged the "threatening" business model of new entrants that "focuses on customer acquisition, and where profitability and cashflow are secondary". "This model is funded by capital funds in a low interest rate environment where traditional investment yield has been so low that taking unconventional risk becomes an attractive option," he said.

The outgoing ABS chairman Piyush Gupta, who is also CEO of DBS Group, said he was confident that Singapore banks can today hold their own even against new competitors. "With one caveat - we must have a level playing field," he said.

He later told the media in a statement: "We welcome new market entrants as they will create further energy in the market, benefitting consumers at the end of the day. With our digital transformation efforts well underway, Singapore banks can today hold our own. It is also heartening that MAS is committed to creating a level playing field and is proceeding thoughtfully with the liberalization."

Wee Ee Cheong, chief of UOB, said in a media statement that the bank welcomes the diversity that the new players may bring with the digital bank licenses to be granted, noting that UOB has been collaborating with like-minded ecosystem partners to build engagement.

"Banking will continue to be shaped by how financial service providers ensure customers' interests are not only anticipated, met and protected, but that their experiences are also differentiated."