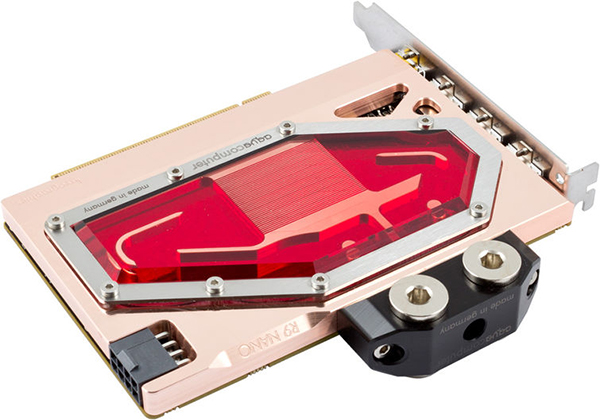 Following on the official launch of the Radeon R9 Nano late last week, Aqua Computers has now announced what amounts to the first water block for the diminutive Fiji card.

The new water block – the Kryographcis R9 Nano – from the German manufacturer is a single-slot solution made of pure CNC-milled electrolytic copper, crafted from AMD’s own 3D schematics of the Nano’s PCB.

It is a full-cover block that provides active cooling to the VRMs as well. Aqua Computers says that the VRMs make contact with the copper block via thermal pads, whereas the GPU and High Bandwidth Memory (HBM) use thermal paste.

According to the company, users can expect GPU temperatures below 35°C while running at extreme load in Furmark, an extremely intensive GPU stress test.

Two versions of the water block will be available – a windowed block with a machined Plexiglass cover to show off the liquid coolant, and a plainer closed block version with a brushed aluminium cover. 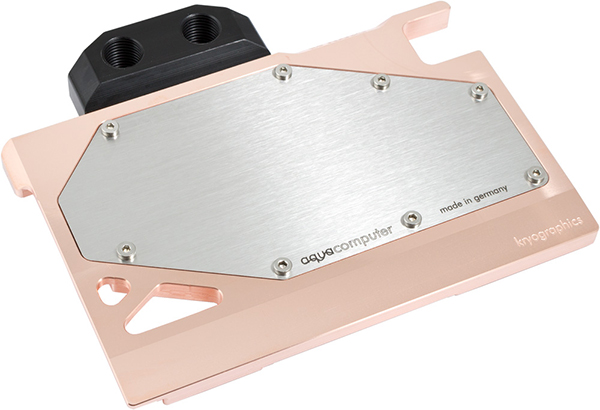 There is also a replacement I/O bracket available for use with the single-slot design.

We don't have information on the price yet, although Aqua Computers did say it will be available some time this week.

Join HWZ's Telegram channel here and catch all the latest tech news!
Our articles may contain affiliate links. If you buy through these links, we may earn a small commission.
Previous Story
This self-destructing computer chip can protect top secret data
Next Story
RHA launches the ultra-compact S500i