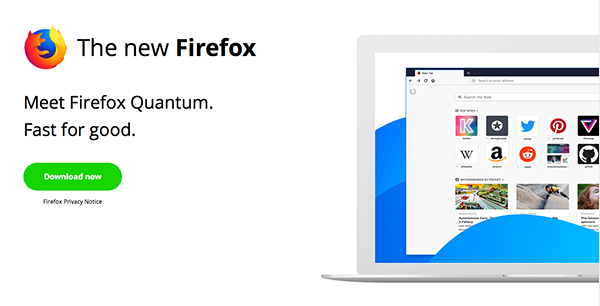 Firefox has seen its market share dwindle over the past couple of years, but it wants to woo users back in a big way with its latest release, Firefox Quantum.

Dubbed by Mozilla as the biggest update to Firefox since Firefox 1.0 in 2004, Firefox Quantum features massive performance improvements and a thoroughly updated design.

Firefox Quantum uses Mozilla's next-generation web browser engine called Project Quantum and is said to be twice as fast as Firefox was 6 months ago.

Firefox Quantum will also use less memory, up to 30% less as compared to Google Chrome.

As you would expect, Firefox Quantum will be highly customizable. Themes let users change the look of their browser, while extensions will increase the functionality and capabilities of the browser.

Firefox Quantum is available as a free download here.