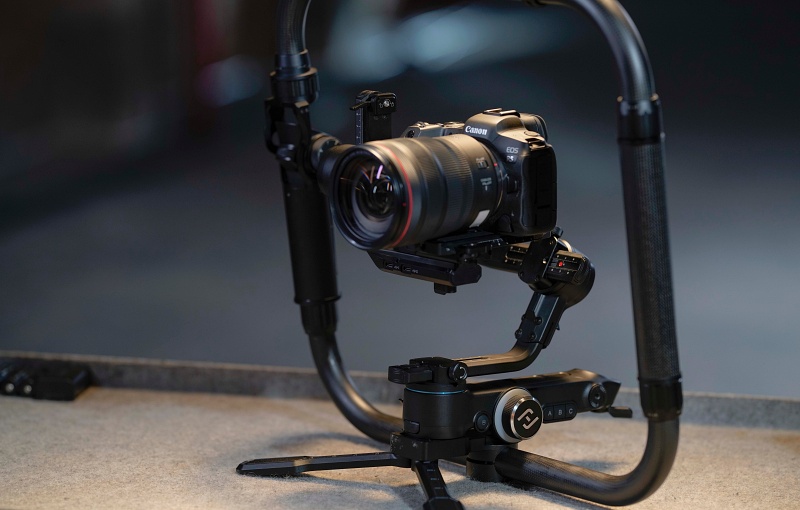 Made for professional cinematographers and videographers, the FeiyuTech Scorp Pro weighs 2.1kg (4.63lbs) with a 4.8kg load capacity. It has a detachable handle which can work as a remote control for Somatic mode. The built-in vertical mounting plate allows the camera to be installed on the gimbal in portrait mode and the ARCA quick release base plate enables the gimbal to be quickly mounted on popular quick release systems.

Its 2,500mAh battery has a battery life of 12 hours and can be recharged via the USB-C port. An 18W fast charger will be able to refuel the battery in less than three hours. Designed for vloggers, content creators and social media influencers, the FeiyuTech Scorp is the lighter of the two models at 1.179kg (2.6lbs) with a 2.5kg (5.5lbs) load capacity. While it is specifically built for the Sony A7 series, the Scorp is compatible with mirroeless and DLSR cameras of various sizes.

An integrated hanging handle helps you control the movement of the lens when shooting upright or upside down. You don't need to have a separate tripod as it comes with a folding aileron bracket.

Other specs include a five-way center of gravity adjustment, centre of gravity memory slider, arca quick release plate, a 1.3-inch OLED touchscreen, super anti-shake algorithms, and a 2,500mAh battery that delivers up to 8 hours of usage. The USB-C port suppots PD fast charging and only takes 5 minutes to provide up to 30 minutes of usage, or 1.5 hours for a full charge.

The FeiyuTech Scorp and Scorp Pro are now available for purchase now at US$429 and US$659 respectively.

Join HWZ's Telegram channel here and catch all the latest tech news!
Our articles may contain affiliate links. If you buy through these links, we may earn a small commission.
Previous Story
Fujifilm's new flagship Instax camera, the mini Evo, will come in time for Christmas
Next Story
Deathloop, Psychonauts 2 and It Takes Two lead The Game Awards 2021 nominees