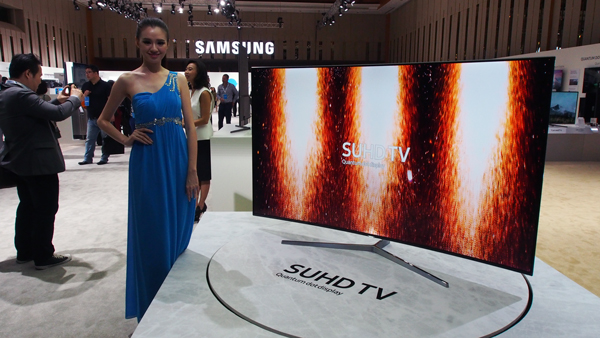 At the Samsung Forum 2016 in Kuala Lumpur, the Korean electronics giant announced the new KS9000 SUHD curved smart television and its accompanying line-up. The curved television boasts many features, including a bezel-less form factor, and 1,000 nits of brightness while including Quantum Dot Display technology found in last year's models. The other 2016 models are also packed with features to make the this year's spread an attractive one.

First off, the new curved KS9000 SUHD (a term for UHD displays made by Samsung) smart television updated their physical appearance. It comes with no visible screws in the front or the rear, and the screen itself has little to no bezel visible on the sides. Samsung claims that this is important for the KS9000 SUHD television to be more immersive for the viewer's watching experience.

The KS9000 SUHD television uses cadmium-free, 10-bit Quantum Dot Display. You can read our explanation on QDD here. The display allows most viewers to enjoy optimal viewing experience, regardless of how dim or well-lit the television's room can be. Combined with 1,000 nits of brightness, it gives a premium High Dynamic Range experience - there's improved contrast between light and dark images. The new Ultra Black technology also significantly reduces light reflection, reducing glare from the television set by absorbing natural light.

The KS9000 and rest of the Samsung Smart televisions for 2016 are all built with Tizen OS, a Samsung's proprietary home appliance operating system that is compatible with Android apps. All of them come with new features that are targeted at improving user experience. For instance, the 2016 smart televisions can now recognize the game console, OTT set-top box, or home theater system that's connected to the television. All these peripherals can be controlled using only one Smart Control remote, eliminating the need for multiple remote control bars.

Other features include TV Plus, where the smart TV interface eliminates the process of switching between OTT content and live TV channels. You can now access OTT set-top box content as if it was a channel on television, reducing the steps needed to access OTT content without requiring and app installation.

2016 Samsung smart TVs will also feature Clean View. The television set will automatically detect picture quality and it will remove all unwanted digital noise or interference from the detected source. At the same time, Clean View will enhance color and contrast levels.

Availability and pricing of the 2016 smart television lineup will be announced at a later date.

Join HWZ's Telegram channel here and catch all the latest tech news!
Our articles may contain affiliate links. If you buy through these links, we may earn a small commission.
Previous Story
Is Facebook planning for ride-sharing services?
Next Story
Look out for these Samsung home appliances in 2016