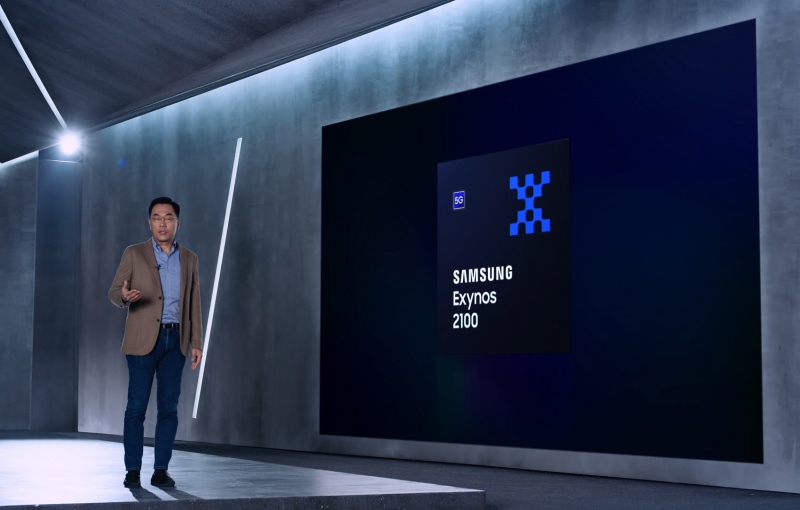 Samsung just announced the Exynos 2100 at the first virtual event, Exynos on 2021.

The Exynos 2100 is Samsung's first mobile chipset with an integrated 5G modem. The integrated 5G modem supports sub-6GHz and mmWave spectrums from 2G GSM/CDMA, 3G WCDMA, and 4G LTE. In terms of speed, the 5G modem has a maximum downlink speed of up to 5.1Gbps in sub-6GHz and 7.35Gbps in mmWave, or up to 3.0Gbps in 4G networks with 1024 Quadrature Amplitude Modulation (QAM) support.

Graphics performance is improved by more than 40% due to the Arm Mali-G78 GPU. There is also advanced multi-IP governor (AMIGO) technology integrated in the Exynos 2100, which helps to manage and optimise power usages of the CPU, GPU and other processes. AI capabilities are boosted on the Exynos 2100 with the new tri-core NPU. It can perform up to 26-trillion-operations-per-second (TOPS) with more than twice the power efficiency than the previous generation.

The image signal processor (ISP) can support camera resolutions of up to 200MP and connect up to six individual sensors. In addition, it is capable of processing four sensors concurrently for richer multi-camera experiences. Coupled with the multi-camera and frame processor (MCFP), the ISP can combine feeds from multiple cameras for enhanced zoom performance, and improved image quality for ultra-wide shots.

Samsung says the Exynos 2100 is currently in mass production, so you can expect to see it in the upcoming Galaxy S21 phones.

Join HWZ's Telegram channel here and catch all the latest tech news!
Our articles may contain affiliate links. If you buy through these links, we may earn a small commission.
Previous Story
ASUS unleashes its Intel Z590 motherboards
Next Story
Belkin launches a more affordable MagSafe charging dock for the iPhone 12