EVOS SG has revised its roster for MPL Season 5

EVOS SG has revised its roster for MPL Season 5 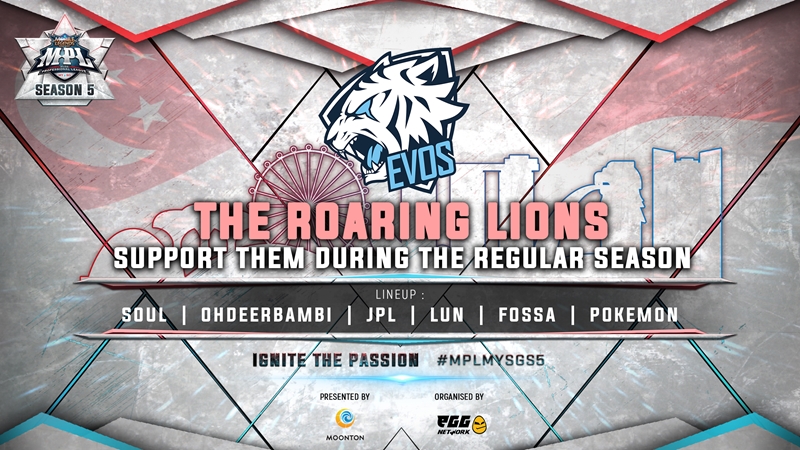 Like conventional sports teams, competitive esports rosters often see players shuffled in and out based on how their specialisations tie in with the current meta. However, there will also be "evergreen" players, who we'll see in the main lineup most of the time. Need a good example? There's SKT T1's Faker, for starters - the Korean mid-laner is one of LoL's longest-running competitive players, and that's being humble about it already.

Speaking of MOBAs, let's zoom into something a little closer to home. Local esports team EVOS SG, who you might remember as the champions from Season 4 of the Mobile Legends: Bang Bang Professional League, have announced their updated roster of players for Season 5.

Of course, the new players aren't new to the competitive scene, with the exception of Pokemon, a rising ML: BB star who will be making his professional debut this season. Lun and Fossa have previously competed under Resurgence and Notorious Villains banners respectively.

But no competitive team ever made it big without good guidance and mentorship, and so EVOS SG has also announced that they've assigned a new coach to manage the team, although he is by no means an unfamiliar face. Formerly from Resurgence alongside Lun, Ong "Aeon" Wei Sheng will be taking point as the team's new coach, having taken his previous team to 4th place in the past two competitive seasons.

Being the defending champions, EVOS SG is one of five teams directly invited by Moonton to take part in S5's Regular Season, bypassing the qualifier stages. The others are Todak, Axis Esports, Geek Fam and Team Bosskurr.

As for the rest, the qualifying rounds for both countries (Malaysia and Singapore) are set to commence on 7-9 February and 15-16 February respectively, allowing another five teams - two from Malaysia and three from Singapore, to compete alongside the "big boys".

As always, we're looking forward to some exciting fights, and may the best team win!

Join HWZ's Telegram channel here and catch all the latest tech news!
Our articles may contain affiliate links. If you buy through these links, we may earn a small commission.
Previous Story
Marvel just teased all of their Disney+ TV shows in this new trailer
Next Story
The first Fast & Furious 9 trailer finally gives us justice for Han