Everything we learned from Summer Game Fest's PlayStation 5 DualSense reveal

Everything we learned from Summer Game Fest's PlayStation 5 DualSense reveal 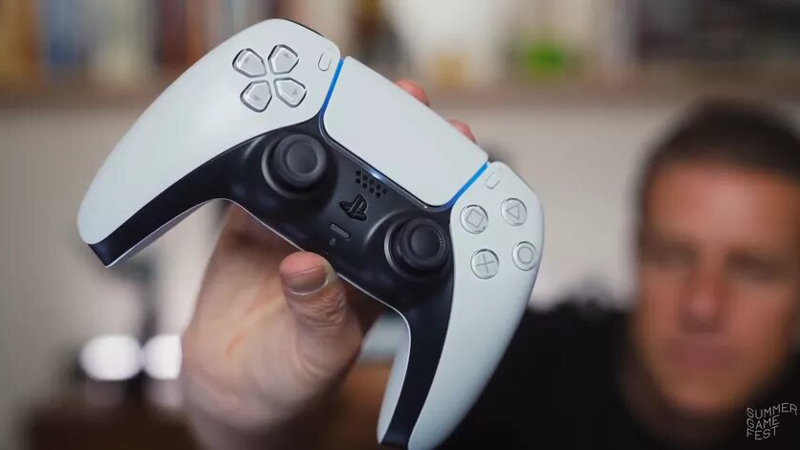 Looks like we’re not getting that back button after all.

Geoff Keighley recently went hands-on with the PlayStation 5 controller DualSense, during a special Summer Game Fest stream. Not only did he get a first look at the controller, but he also got to test it out on Astro’s Playroom, a PlayStation 5-exclusive videogame.

Keighley also highlighted the adaptive triggers, which allow developers to fiddle how much tension and vibration players feel when using them. You could pull on a bowstring in Horizon Forbidden West for example, and feel that tension in the trigger you’re pulling. In Astro’s Playroom, the feature is demonstrated by using the triggers to control a ‘frog suit’ that moves around by jumping.

The DualSense also includes improved haptics, which goes a lot further than the DualShock 4’s rumble/vibration tech. In Astro’s Playroom, Keighley mentioned feeling a distinctive rumble as Astro fought through a sandstorm. That experience is paired with crisp audio from the DualSense’s speakers. “The speaker in the DualSense feels like it has much more range than the PS4 speaker, and it often directly ties into what's happening with the haptics,” said Keighley.

Astro’s Playroom itself comes pre-loaded with all PlayStation 5 consoles, making it the perfect game to boot up and test the DualSense’s capabilities. It seems like a cute little platforming game, with tons of visual easter eggs to the PlayStation consoles’ long history. It also has players blow into controllers. What is this, The Legend of Zelda: Spirit Tracks?

If the DualSense’s current colour scheme is not to your taste, you might be out of luck. During the stream, worldwide head of marketing at PlayStation Eric Lampel mentioned, “Right now it’s a hard enough job to get the unit that we’ve showed out, but we’ll talk about it at some point.”

So we will definitely get new DualSense colour schemes at some point, just not at launch. Black and white will have to do for now! Check out our coverage of Sony’s Future of Gaming event here.

Join HWZ's Telegram channel here and catch all the latest tech news!
Our articles may contain affiliate links. If you buy through these links, we may earn a small commission.
Previous Story
Logitech has joined forces with Herman Miller to make a US$1,495 gaming chair
Next Story
Samsung Galaxy Buds Live rumoured to have ANC and up to 7.5 hours battery life