If you're looking to upgrade your rig soon, these new lineup of Z590 motherboards for the 11th Gen Intel Processors might feature what you want!

A few pointers here before we take a look at the motherboards; both 10th and 11th Gen Intel Processors are still on the very optimised 14nm process node, and you can read more about the developments covered here.

There's some good news though, as a number motherboard manufacturers have uploaded new Z490 BIOS that support performance-improving features like Resizable BAR or Smart Access Memory.

There’s also links to where you can purchase them as well and with everything out of the way, let’s take a look at the motherboards available soon!

Starting off this list is ASRock’s line of motherboards- they’re simple and have a lot of features that’s meant for enthusiasts and beginners in DIY PC builds!

You can take a look at their prices and availability over on their official Lazada page, with prices and series of every component. In terms of features, they’re nearly identical, save for the Thunderbolt 4 ports on the Taichi. Those ports are complemented by Killer Wi-Fi 6E, 2.5Gb LAN, and custom Lightning Gaming Ports.

What’s different about these Lightning Gaming Ports is that they are designed specifically for gaming mice with ultra-high polling rates, like this one from Razer.

Don’t expect it to be a great overclocking board though, as it's just a 14 Phase DR.MOS Power Design, which is lower than most of the high-end boards from other brands.

Both motherboards support the PCIe Gen 4 standard for your graphic card and M.2 NVME SSD. In addition, the Taichi is capable of AMD CrossFire on both of it’s PCIe Gen 4 graphic card slots, while the Velotica can support only a single graphic card. 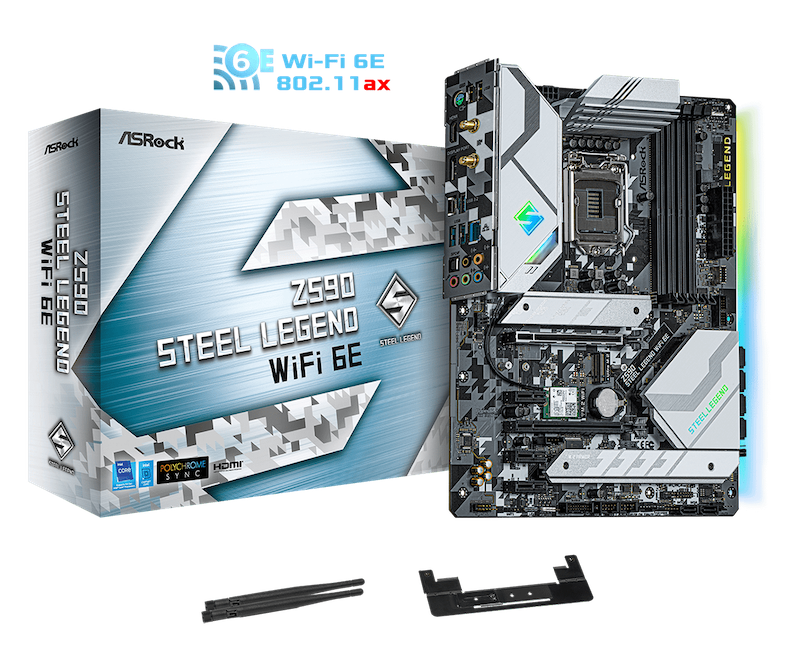 If you invert the colour scheme on the Z590 Taichi and fit the port selections and features on the Z590 Velocita, this is what you get; the ASRock Z590 Steel Legend Wi-Fi 6E.

Included in this metallic-grey camouflage motherboard is Killer E3100 2.5G LAN and Wi-Fi 6E, fancy address RGB headers, and memory overclocks of up to 4800MHz!

There’s also a front-panel USB 3.2 Gen 2 connector for when you’ve fully embraced the Type C future, and the transfer and charging speeds that come with it. And finally, we have the ASRock Z590 Pro 4. There are two variants of this series, one of which is the full-sized ATX version while the other is a smaller, mATX one.

This series is catered for more mainstream or new entrants who want the new features while dabbling a little in the realm of overclocking, as it comes with 12 Phase DR.MOS VRM.

There’s also PCIe Gen 4 support for the graphic card and M.2 slot, and even a front connector Type-C port, and Intel Gigabit LAN.

Join HWZ's Telegram channel here and catch all the latest tech news!
Our articles may contain affiliate links. If you buy through these links, we may earn a small commission.
Previous Story
Samsung considers blood glucose monitoring for diabetics in its next Galaxy Watch
Next Story
Vicarious Visions is reportedly working on a Diablo 2 remake with Blizzard