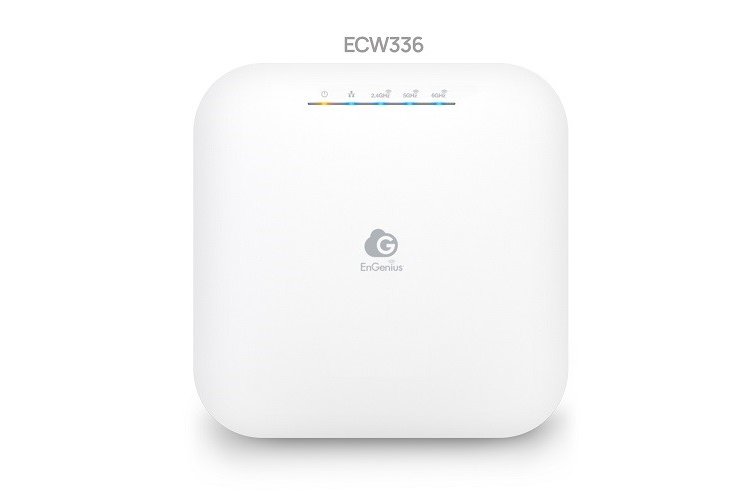 The importance of good Wi-Fi has grown steadily over the years as wireless networking technology matures and end-users are spoiled by Gigabit-class mobile data speeds. To better serve the SMB market and the burgeoning number of Wi-Fi enabled devices, EnGenius just announced the release of its first Wi-Fi 6E access point.

Powered by the Qualcomm Networking Pro 1210 platform processor, the EnGenius ECW336 access point comes with support for the 6GHz spectrum, which is supported by the Wi-Fi 6E standard and promises to overcome device congestion and limited bandwidth with existing 2.4GHz and even 5GHz bands.

The ECW336 contains three radios (2.4GHz, 5GHz, 6GHz) to support existing and new wireless devices. The product website also notes that the ECW336’s radio supports 4x4:4, which means it has four antennas each for transmitting and receiving.

The business access point is powered by PoE+ and comes with a 5Gbps Ethernet port to support the higher wireless transmission speeds.

EnGenius says its new access point can support the ever-growing bandwidth demands of densely congested environments such as multi-family units, senior living, student housing, retailers, and corporate workplaces, among others.

Though Wi-Fi 6E promises a future of interference-free signals and ample bandwidth, it is not yet accepted globally. Countries such as United States and United Kingdom have adopted it, though only South Korea has adopted it in the Asia Pacific. A list of the countries that have adopted it or are “considering” doing so can be found here.

Finally, network switches that support 2.5 or 5Gbps with POE are also significantly pricier than 1Gbps switches, which can translate to slightly higher costs for early adopters.

The EnGenius ECW336 will be available in the first quarter of 2022. No pricing information is available at the point of publication but keep tabs as we'll update this article when we get localised information.

Join HWZ's Telegram channel here and catch all the latest tech news!
Our articles may contain affiliate links. If you buy through these links, we may earn a small commission.
Previous Story
Secretlab's Pokemon Collection chairs will be available locally starting today
Next Story
Rainbow Six Extraction is coming to Xbox Game Pass at launch