EmTech Singapore: Drones are our future

EmTech Singapore: Drones are our future At this moment, things are winding down at EmTech Singapore 2015, organized by Koelnmesse. The speakers are tired from a whole day of speaking and even the attendees aren't as perky as they were in the morning. We are among the latter of course, tired but intellectually sated. After all, EmTech Singapore is filled with future tech topics, ranging from 3D printing in medicine to AI to drones, which coincidentally is also the topic of this news post.

Rolls Royce kicked things off by talking about how they envision a new era for automation (dubbed the Ship Intelligence era) where ships are completely controlled by remote and operate without anybody on board. Everything will be automated, which will not only reduce costs (something every business thinks about) but also raise efficiency.

We're very much interested in this but since Rolls Royce doubts that it'll happen anytime soon due to international maritime laws needing to be readjusted (a SOLAS review will only happen years from now and that's when Roll Royce wants to push for the idea of drone ships) as well as insufficient progression of technology (right now, reliability is a big issue). We guess we'll just have to wait a bit longer before we book that automated cruise on the Titanic II. Impressive as the Rolls Royce presentation was, what came next blew us away. The session that stole the show (for us anyway) was when Mohan Rajesh Elara, a lecturer from Singapore's University of Technology and Design, showed off the Scorpio. 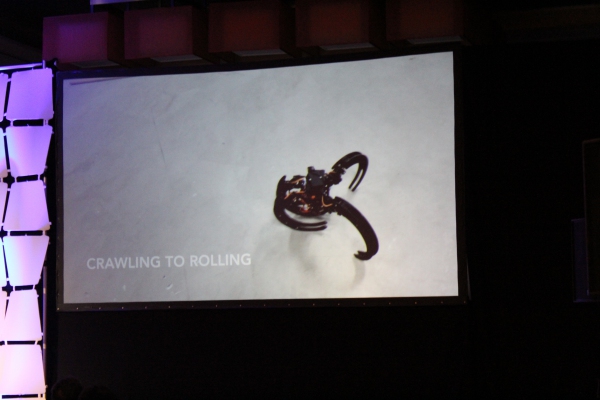 It's like something totally out of a sci-fi movie. Right now, it can roll and walk and even right itself if it gets flipped over. That's not the extent of it though as the SUTD has plans for it to be able to climb surfaces in the near future.

While we're not sure if the Scorpio is developed for urban warfare in mind, the presentation did make it a point that soldiers in the future might deploy something like the Scorpio in future urban conflicts. Of course, applications for the drone can also be outside the realm of combat. For example, it can function as disaster relief assistance by venturing into nooks and crannies rescuers can't access. You don't have to take our word for it, take a look at the demo video that the SUTD cooked up.

Impressive isn't it? If you want a close look at the drone with your own eyes, a model of it is currently being exhibited at the Da Vinci: Shaping the Future exhibition at the ArtScience museum at Marina Bay Sands.

Join HWZ's Telegram channel here and catch all the latest tech news!
Our articles may contain affiliate links. If you buy through these links, we may earn a small commission.
Previous Story
Apple enjoys record-breaking quarter, also ships one billionth iOS device
Next Story
Singtel signs MOU with Ericsson to study future of 5G networks