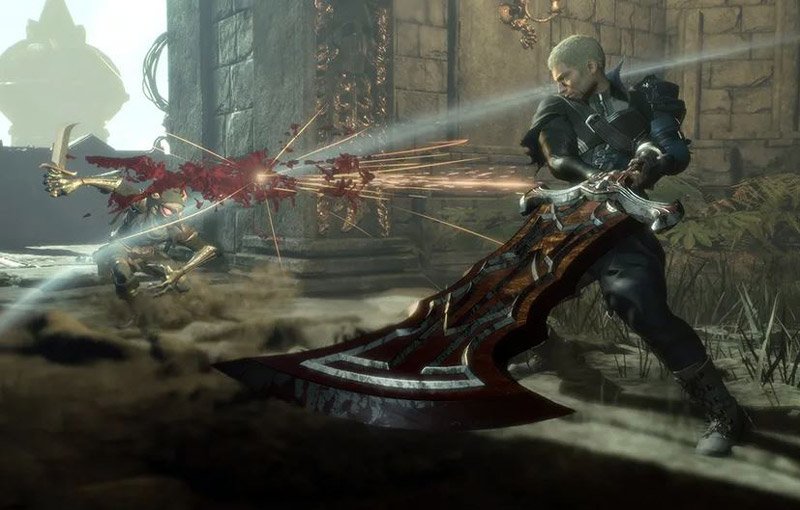 Watch the chaotic reveal trailer below:

Franchise veterans Tetsuya Nomura and Kazushige Nojima are working with Team Ninja and Koei Tecmo Games for this new Final Fantasy title. The game seems to be dark and edgy in tone, with a protagonist utterly obsessed with ridding the world of chaos. You even say the word chaos, and he’ll end you - that’s the vibe we’re getting.

The central characters are a trio of Warriors of Light who have to hack and slash their way through waves of monsters old and new, and the trailer ends with them facing off with the evil knight Garland from the first Final Fantasy game. Square Enix describes the story as such: “Jack and his allies, Ash and Jed, burn with resolve to defeat Chaos as they throw open the gates to the Chaos Shrine. Yet doubts remain—are they truly the Warriors of Light the prophecy foretold?”

A demo of Stranger of Paradise Final Fantasy Origin is now available on the PlayStation 5 Store to play until 24 June, although lots of players are reporting issues with the demo being unplayable currently. An old leak of the game reported that it would have Dark Souls-like gameplay elements, but time will tell.

The game launches in 2022 on PlayStation 4, PlayStation 5, PC, Xbox One and Xbox Series X|S.

Join HWZ's Telegram channel here and catch all the latest tech news!
Our articles may contain affiliate links. If you buy through these links, we may earn a small commission.
Previous Story
Execration dominates Blacklist 4-1 to win the Mobile Legends Southeast Asia Cup 2021
Next Story
E3 2021: 90% of the titles from the Xbox & Bethesda Games Showcase will join the Xbox Game Pass