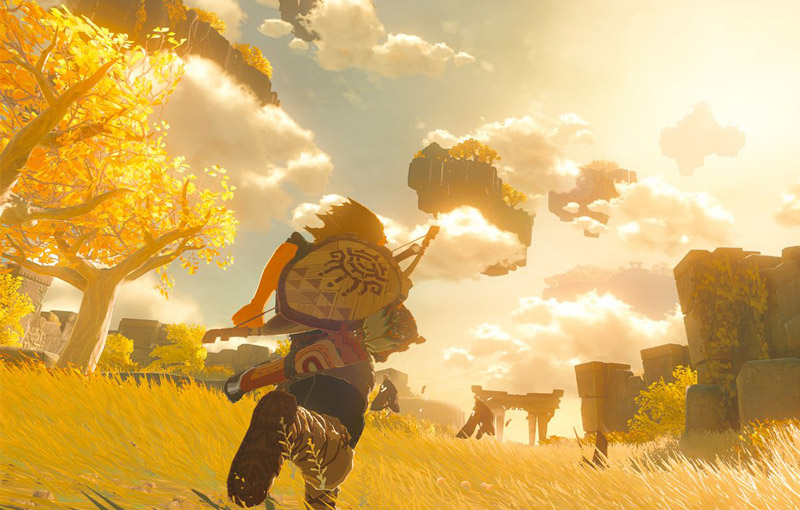 Where are we dropping, Link?

Nintendo’s E3 2021 Direct finally showed off gameplay for The Legend of Zelda: Breath of the Wild 2, and it looks glorious. While an earlier teaser had Link and Zelda explore underground caves, this new trailer flings Link into new environments in Hyrule’s skyline.

The story of this Breath of the Wild sequel continues to be a mystery, but we got to see some tantalising cutscenes here. There’s a rather ominous clip of Zelda falling into a deep dark nothing, preceded by some equally ominous red slime reaching out and grabbing Link. After that, the trailer reveals new floating environments in the skies of Hyrule, and Link presumably skydiving from them.

It looks like the red slime has infected Link’s arm and given him new powers to use, so hey, it might not be as bad as it looks. Maybe it's friendly red slime! In addition to familiar abilities like Stasis returning, Link can now reverse time on objects to send them rocketing back where they came from. Using some form of green energy, he can also phase through solid walls and floors - which has huge implications for the dungeon-crawling gameplay this franchise is known for.

Hyrule has also changed a little bit since the events of the first game. Lots of new enemies are coming for Link, like monstrous grabby hands that come out of cave ceilings - though our hero manages to beat it back with a new flamethrower weapon. Bokoblins also build their bases on Stone Taluses now, which means that you’ll have to deal with the stone-made minibosses in addition to these annoying little creatures. Hopefully, Lynels haven't been given a similar upgrade. Can you imagine?

Nintendo announced that it’s ‘aiming’ to release the Breath of the Wild sequel in 2022, which let’s be honest, probably means that we should expect it in 2023. Hopefully we get more gameplay for this one soon!

Join HWZ's Telegram channel here and catch all the latest tech news!
Our articles may contain affiliate links. If you buy through these links, we may earn a small commission.
Previous Story
E3 2021: Nintendo reveals the end of Samus' story in Metroid Dread
Next Story
The all-new Razer Raptor 27 is the world's first THX-certified gaming monitor