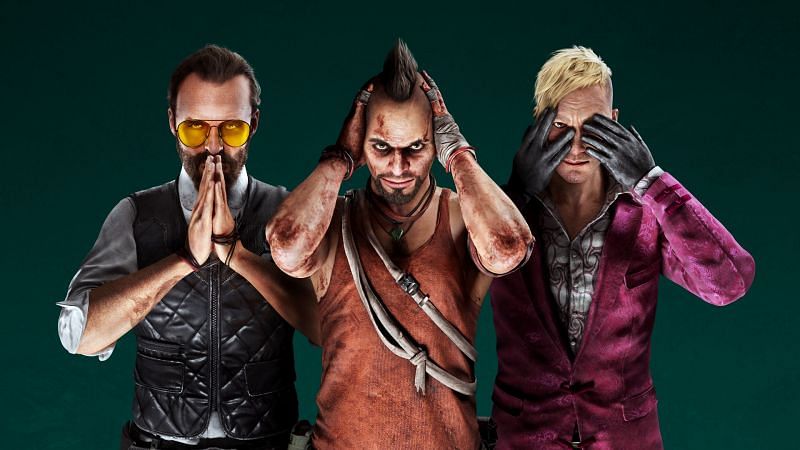 Ubisoft has spilled the beans on Far Cry 6’s post-release season pass content. Providing you fork up the extra cash for it, the season pass will let you play as Vaas Montenegro from Far Cry 3, Pagan Min from Far Cry 4 and Joseph Seed from Far Cry 5 in new story campaigns.

Watch a trailer for this season pass content below:

Far Cry is a franchise known for its strong emphasis on big bads, and that all began with Vaas’ short-lived stint in Far Cry 3 - and his memorable, “Do you know what the definition of insanity is?” monologue. It looks like the DLC involves these villains going back to face former series protagonists like Far Cry 3’s Jason Brody in hallucinogenic dream sequences. These sequences involve a lot of shooting, of course.

Mainline Far Cry games tend to get DLC that breaks away from the established canon. Far Cry 4 had yetis and Far Cry 5 had zombies, and while none of that extra content was particularly good, Far Cry 3’s Blood Dragon DLC was absolutely incredible. It’s good news then, that Blood Dragon will also be available as part of this season pass DLC - though we’re not sure if this is a remastered version of the DLC or a simple next-gen port.

We also got a cinematic trailer detailing the events that kick off Far Cry 6’s story campaign. When the game’s protagonist Dani Rojas attempts to leave the island of Yara and the authoritarian regime of its ruler Anton Castillo, she finds out that Castillo’s son Diego is trying to sail away with her too. Anton finds all of them however, and unloads hellfire upon his people to teach Diego a cruel lesson. Presumably, Dani survives this attack and swears to destroy Anton’s hold over Yara - kicking off the events of the game.

Far Cry 6 launches on 7 October on PlayStation 4, PlayStation 5, PC, Xbox One, Xbox Series X|S, Google Stadia and Amazon Luna. We got a great new gameplay trailer during the Xbox Games Showcase, too!

Join HWZ's Telegram channel here and catch all the latest tech news!
Our articles may contain affiliate links. If you buy through these links, we may earn a small commission.
Previous Story
E3 2021: 90% of the titles from the Xbox & Bethesda Games Showcase will join the Xbox Game Pass
Next Story
E3 2021: Rainbow Six Extraction pits Siege's Operators against mutating aliens