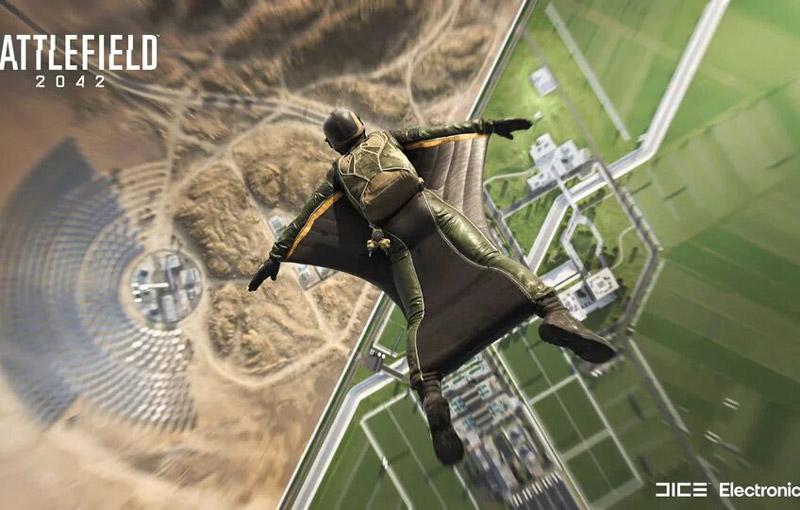 Stay away from those ‘nadoes!

In case you missed the memo, Battlefield is going from 64-player battles to 128-player battles, and its maps are expanding to accommodate that. The main map shown off in this gameplay trailer is vast, peppered with skyscrapers on one side and a flat desert on the other. Players can fight aerially in ships and helicopters, or don wingsuits to jump off buildings and reposition elsewhere.

As if things weren't frantic enough, tornadoes are a thing now. These natural disasters can arrive at a moment's notice to wreak havoc on a map, lifting players and vehicles with reckless abandon and presumably killing them swiftly. Wingsuits will help you avoid these tornadoes, however. For the first time ever, you can also switch out weapon attachments like magazines and scopes on the fly. We also got a look at a couple of the game's other maps - one in the icy plains, and another in a muddy battlefield with rolling tanks.

Battlefield 2042 will have only six maps at launch and no story campaign, and it comes with a paid-for season pass and battle pass for additional content down the line. Instead of character classes, you can now take control of Specialists to diversify your playstyle and access a wider array of weaponry.

Join HWZ's Telegram channel here and catch all the latest tech news!
Our articles may contain affiliate links. If you buy through these links, we may earn a small commission.
Previous Story
E3 2021: Halo Infinite launches with free-to-play multiplayer in Holiday 2021
Next Story
E3 2021: Starfield gets a release date trailer 25 years in the making