Dying Light 2 has been delayed indefinitely

Dying Light 2 has been delayed indefinitely The amount of big game releases getting delayed in 2020 is insane.

Techland’s Dying Light 2 has been delayed indefinitely. It was originally planned for a spring 2020 release - but that’s not happening anymore. Techland’s CEO, Pawel Marchewka stated:

We were initially aiming for a Spring 2020 release with Dying Light 2, but unfortunately we need more development time to fulfill our vision. We will have more details to share in the coming months, and will get back to you as soon as we have more information.

Techland’s statement did not include a new release date for the game, which implies that it has been delayed until much later in 2020. Just from the half-hour slice of gameplay Techland released for Dying Light 2, it’s easy to see why such an ambitious game might need a little more time to get ready. 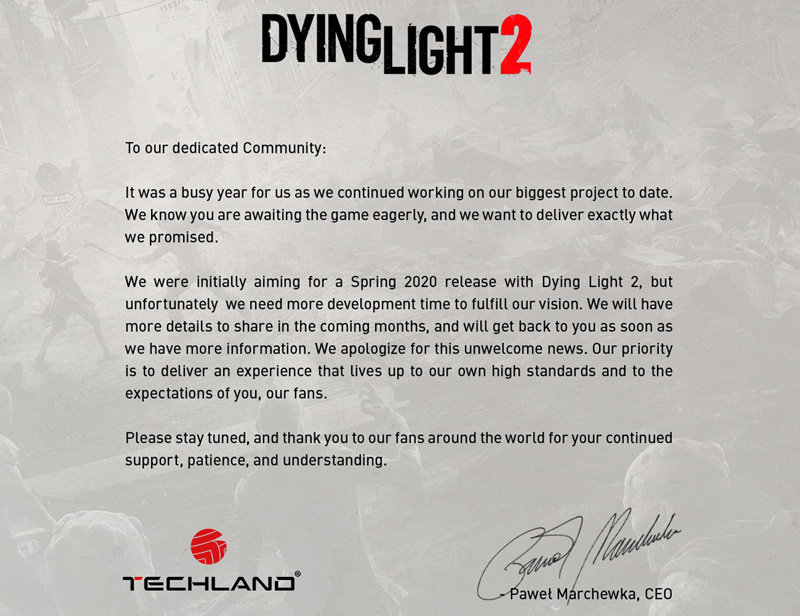 Still, this has been a pretty rough month for game delays. Square Enix recently delayed both the Final Fantasy 7 Remake and Marvel’s Avengers to later this year, and CD Projekt Red followed up by delaying Cyberpunk 2077 to September 2020. Marvel’s Iron Man VR was also delayed from February to May 2020.

Even the games that are coming out in early 2020 have mostly already been delayed to this year. Doom Eternal, Animal Crossing: New Horizons and The Last of Us Part 2 were all delayed. Ubisoft also postponed all their games indefinitely, and has begun restructuring internally.

Delay season has been brutal, indeed.