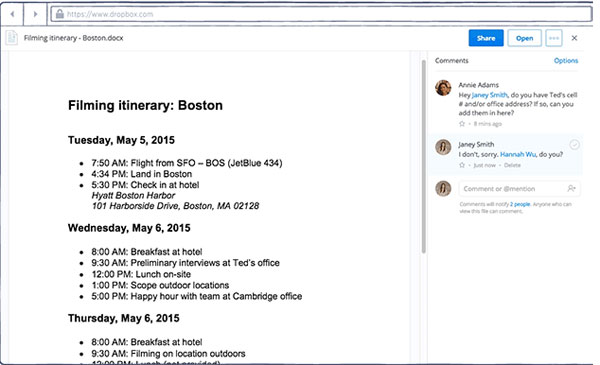 Dropbox has enabled a new feature that allows users to add comments to files stored on the service, allowing users to have streamlined conversations around the file in question. Previously, Dropbox users who wished to discuss shared files would have to hold their conversations elsewhere, perhaps over email or messaging clients.

In addition, Dropbox gives users the ability to simply add anyone into the conversation by typing @, followed by their name or email address. Users don’t have to be existing Dropbox users – they will simply be given a link to the shared file to join the discussion. In case a free-for-all discussion isn’t what you want, file owners will have the option to turn off comments in the Options menu.

The new feature ties in with Dropbox’s integration with Microsoft Office Online, which allows users to edit files directly from their browser via Office Online and automatically syncs changes with the copy of the file on Dropbox. Users can now act directly on comments in Dropbox and hit the ‘Open’ button to begin editing the document in Office Online or its desktop app, facilitating a more seamless collaborative experience.

But that’s not all Dropbox has been working on. It recently launched a sign-up page for Dropbox Notes beta, a new feature that enables multiple users to edit a file at the same time. The screenshot on the page clearly shows an interface that resembles Google Docs, complete with color-coded cursors to indicate your identity and place on the document. 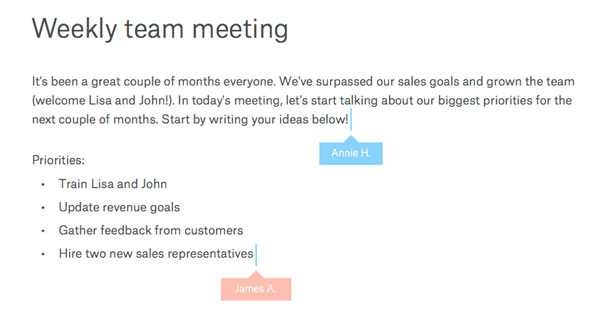 The fact that Dropbox seems to be playing catch-up with Google Docs shouldn’t detract from the reality that these are valuable and welcome features. Dropbox is still one of the more popular file-sharing sites, and its users will definitely appreciate its efforts to create a more convenient and collaborative working environment.

Join HWZ's Telegram channel here and catch all the latest tech news!
Our articles may contain affiliate links. If you buy through these links, we may earn a small commission.
Previous Story
Fun and customizable LG AKA smartphones now available in Singapore
Next Story
Thuraya launches the world’s most advanced satellite phone