If you thought that Steam’s dominance as the definitive library of online games would stop others from entering the space, think again. GOG, formerly known as Good Old Games, has now announced that its desktop client GOG Galaxy is now in open beta. You can sign up right here.

GOG is known for its sizeable DRM-free library of PC games that include both modern bestsellers and classics from past decades. This catalog was previously only accessible via your web browser, but the GOG Galaxy desktop client changes that – it now joins Steam, Origins and Uplay in jostling for a potential spot on your desktop or taskbar.

Unlike Steam which requires its desktop client to deliver your digital purchases, GOG Galaxy is an optional client, so you can still do everything on your browser if you prefer to keep things light. Nevertheless, downloading Galaxy gives you access to features like game backups, achievements, chat and friend lists. The ability to rollback to an older game version is also said to be coming soon – this is a nice feature that will come in useful should you encounter buggy game patches.

Another noteworthy feature is its support for crossplay between games on Galaxy and Steam. One of Steam’s strengths is arguably its ability to play co-op games with friends or engage in multiplayer battles, so GOG’s decision to give its users the ability to play games with their friends who are on Steam is undeniably a smart one. This will also give users less reason to switch away from GOG Galaxy as they will not be restricted to gaming with friends who are on the same platform. 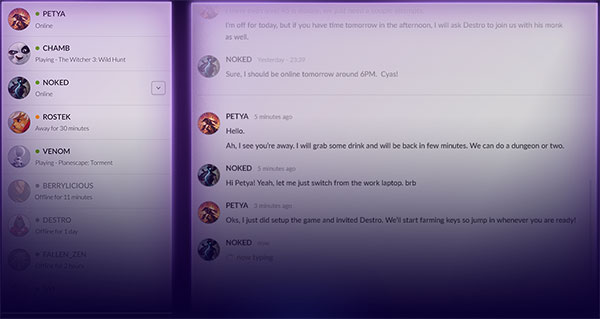 It’s not surprising to see platforms like Steam and Origin try to lock their user bases to their own platform, and GOG’s decision to eschew this echoes its DRM-free approach to games. GOG has designed Galaxy to be as unobtrusive as possible. Other than being completely optional, users can turn off individual features like achievements and chat.

And because its games are DRM-free, users don’t even need to be online to play the games, which helps minimize friction between users and the desktop client. The first major release on GOG Galaxy will be The Witcher 3: Wild Hunt, which will offer automatic updates, achievements and stats right off the bat. According to GOG, this is just the beginning of more triple-A titles to be released in the future.

All in all, GOG Galaxy is good news for gamers. Even if most of us are probably married to Steam, it’s always good to have alternatives to consider, especially DRM-free ones.

Join HWZ's Telegram channel here and catch all the latest tech news!
Our articles may contain affiliate links. If you buy through these links, we may earn a small commission.
Previous Story
Sony unveils 'selfie smartphone' Xperia C4
Next Story
12.9-inch Apple iPad Pro to have Bluetooth stylus, Force Touch and NFC?