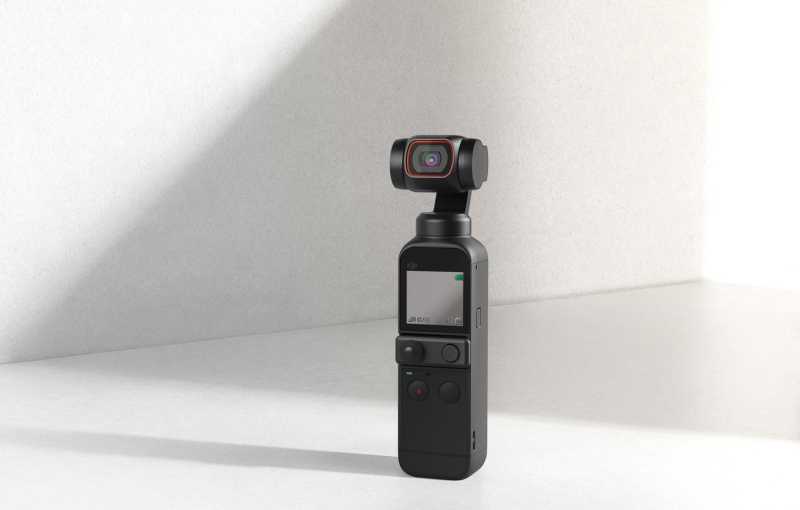 Autofocus is also improved using a Hybrid 2.0 AF blend of phase and contrast detection. Maximum video resolution is still at 4K 60fps at 100Mbps, but DJI added HDR video for more vivid colours. In addition, the Pocket 2 offers up to 8x zoom in 64MP mode or 4x lossless zoom in 1080p or 16MP mode.

Audio recording is vastly enhanced on the Pocket 2; it has four microphones (double that of its predecessor) with Directional Audio to pick up as much details as possible, and SoundTrack to adjust the audio based on where the camera is facing. There is also Audio Zoom, which narrows the sound field when the user zooms the camera in on a subject. To keep audio clean in outdoor settings, the Pocket 2 has an optional wind noise reduction feature that can be enabled.

Other new features include Fast Wake to power up the Pocket 2 instantly, Drop Aware to take preventive measures when it senses the gimbal falling, and Pause Recording to stop video recording during operation.

The bottom portion of the handle can be removed to attach several new accessories such as a base to attach the Micro Tripod, a Do-It-All Handle with a tripod base, Wi-Fi and Bluetooth module, speaker, 3.5mm audio jack, and wireless microphone receiver.

The DJI Pocket 2 is now available for pre-order from store.dji.com and authorised resellers in Singapore. The standard package is priced at S$529 and consists of the Pocket 2, Mini Control Stick and Tripod Mount (1/4"). The Creator Combo is priced at S$729 and includes the Pocket 2, Mini Control Stick, Tripod Mount (1/4"), wide-angle lens, wireless microphon + windscreen, Do-It-All Handle, and Micro Tripod.

Join HWZ's Telegram channel here and catch all the latest tech news!
Our articles may contain affiliate links. If you buy through these links, we may earn a small commission.
Previous Story
Mophie launches a 4-in-1 wireless charging mat with extra USB-A port
Next Story
Signify launches an Ultraviolet C-powered Philips desk lamp that disinfects all that it shines upon