Disney+ Hotstar will launch in Malaysia on 1 June

Disney+ Hotstar will launch in Malaysia on 1 June 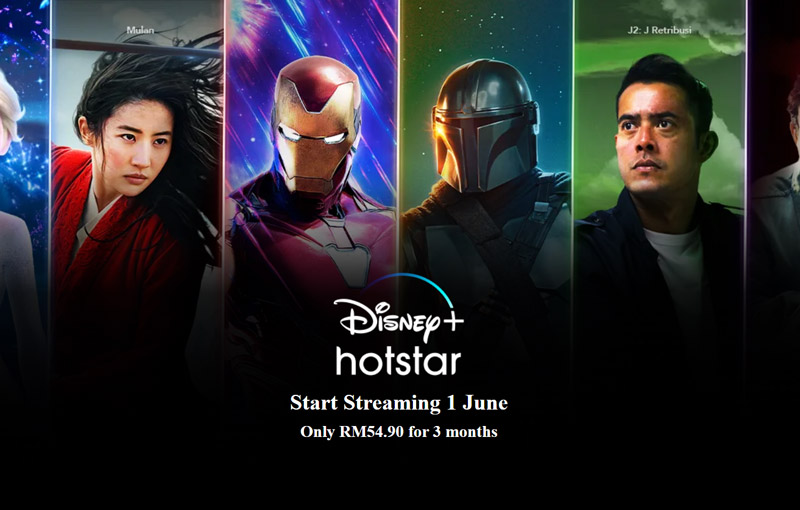 The Walt Disney Company have finally announced a release date for their streaming service Disney+ in Malaysia: 1 June, 2021. Titled Disney+ Hotstar in this region, the streaming service will cost RM54.90 for a three-month subscription.

Just like everywhere else, Disney+ Hotstar will feature an expansive slate of original movies and TV shows like The Mandalorian, The Falcon and the Winter Soldier and The Mighty Ducks. In addition to all their original content, subscribers can also view a robust catalogue of movies and TV shows like Nomadland, The Walking Dead, Jojo Rabbit, Criminal Minds, Fresh off the Boat, The Simpsons, Grey’s Anatomy and many more.

There are a total of 18,000 episodes and 800 movies available to stream from Disney's wide umbrella of brands: Disney, Pixar, Marvel, Star Wars, National Geographic.

Here's where it gets interesting for Malaysians, though. Disney+ Hotstar has signed a series of multi-year agreements with several Malaysian studios to house some of their content exclusively. This means a couple of anticipated Malaysian blockbusters - like the action flick J2: J Retribusi and horror movie Zombitopia - will skip theatrical runs entirely and launch directly on Disney+. Once its theatrical debut is over, Ejen Ali The Movie 2 will also stream exclusively on Disney+.

The streaming service will also feature lots of local content, ranging from the popular animated series Upin & Ipin to the Primetime drama Single Terlalu Lama. Single Terlalu Lama and Kekasih Hati Mr. Bodyguard will even premiere first at 7am on the same day as the linear telecast only on Disney+ Hotstar. Other local series will hit Disney+ up to 15 hours, “before anywhere else,” according to a release. Of course, lots of local movies like J Revolusi, KL Gangster and Roh will be available to stream as well, along with TV shows like Ejen Ali, Club Mickey Mouse, Wizards of Warna Walk and Ejen Ali. The content lineup includes many Chinese, Tamil and Hindi movies and TV shows too.

Cool, but how does it work?

You’ll be able to stream Disney+ Hotstar via a wide selection of compatible mobile devices and connected TV devices at launch. Each registered account can support two concurrent streams, and the majority of content can be downloaded on mobile and tablet platforms. Obviously, all this content is commercial-free and comes with a dedicated kids section just like Netflix. You can subscribe via the Disney+ Hotstar website, the Disney+ Hotstar app on Android and iOS devices or with Astro’s special packages. A subscription will cost you RM54.90 for three months.

For those of you wondering what 'Hotstar' is now doing in Disney+'s name, there's a simple explanation. Hotstar is an Indian streaming service owned and operated by Star India. After Disney acquired Star India's parent company 21st Century Fox in 2019, the company decided to integrate Disney+ with Hotstar in April 2020 by using its existing infrastructure and userbase. Hotstar was a hit at the time, with over 150 million monthly users.

This new amalgamation of Disney+ and Hotstar is aptly called Disney+ Hotstar, and it combines Disney and Disney +'s original programming with Hotstar's existing content, along with some stuff from Hulu for good measure. For example, Hulu's Marvel animated series M.O.D.OK. will launch on Disney+ Hotstar in Malaysia, where Hulu isn't available. In Singapore, Hotstar and Disney+ exist as two separate entities, with the former service having just launched in November 2020. The more you know!

2) All the supported devices and software to access Disney+

Join HWZ's Telegram channel here and catch all the latest tech news!
Our articles may contain affiliate links. If you buy through these links, we may earn a small commission.
Previous Story
Marvel reveals new Phase 4 movie titles, dates and footage with a trailer
Next Story
CEE returns with an online festival and new gaming room category