It wouldn't be CES if we weren't treated to some cool vision of the future of computing. Alienware today showed off the Concept UFO, a handheld portable PC that happens to look a lot like the Nintendo Switch. The controllers at the side can even be detached, further completing the Switch-esque look. Alienware thinks this quirky little device could let you play your favourite AAA PC titles on the go, so don't think of it as a gaming console.

It's got an 8-inch screen with a 1,900 x 1,200-pixel resolution, but what's interesting is the different ways in which you can use the machine. The controllers attach magnetically to the screen, and you can also join them together via an accessory that turns them into a bona fide gamepad. Unlike the Switch, the Concept UFO is quite clearly a machine for one. You're not meant to play party games with your friends on this one, and both pieces of the controller are different pieces of a single unit.

With the controller detached, you can set the display on its kickstand and game, or simply connect it to an external display. It'll take mouse and keyboard inputs too, just like a regular PC.

The Concept UFO is powered by Windows 10, but Dell also created a custom app interface for easier navigation. As with any handheld though, it's got to feel comfortable in your hand and natural to use. To that end, the company says it put in over hundreds of hours trying to get the controller design and ergonomics right, spending the last few months improving the buttons and tweaking the weight.

The machine will feature 10th Gen Intel processors, along with Wi-Fi, Bluetooth, and Thunderbolt 3 connectivity. It's larger and heavier than the Switch though, so it's probably best used as a mobile PC rather than a proper handheld. 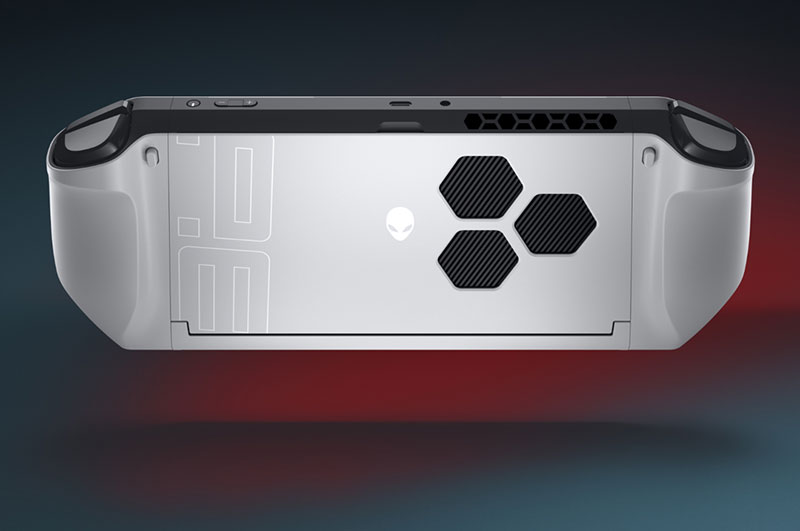 Of course, the Concept UFO is still what it's name says – a concept design. We're still quite a distance away from a release, if ever, and Alienware will probably continue to refine the design. I'm also of the opinion that PC games are meant to be played only on the PC, and any mobile system will run into problems delivering the performance and graphics fidelity we've come to expect from PC games, given their more limited hardware.

But if anyone is going to come up with a good handheld PC, it's probably going to be a big player like Dell. The Concept UFO is an ambitious device, serving up a really cool look at the possibilities of mobile PC gaming.