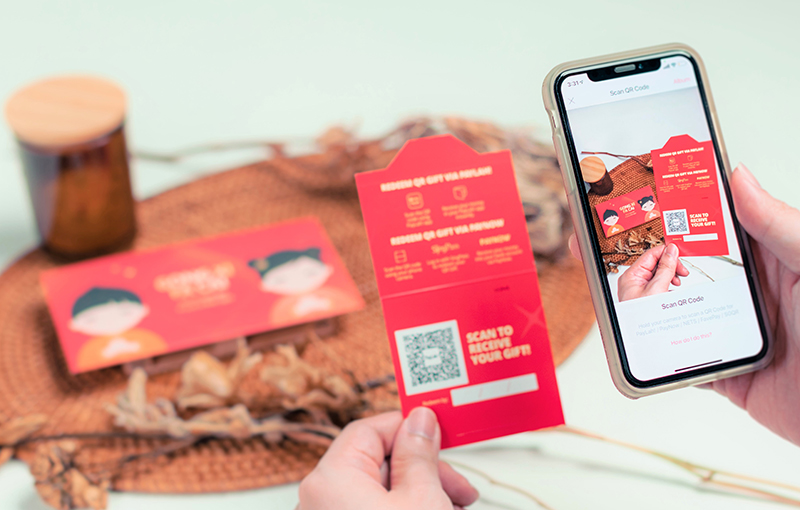 The coming Chinese New Year (CNY) festive period might be an odd one, seeing how there's a pandemic lurking about. However, that isn't likely to stop merry-makers from spreading a little more joy without spreading other less desirable things.

To that end, DBS unveiled new, contactless ways for its users to give out digital red packets. There's a semi-digital option called DBS QR Gift, and a fully digital alternative called DBS eGift. 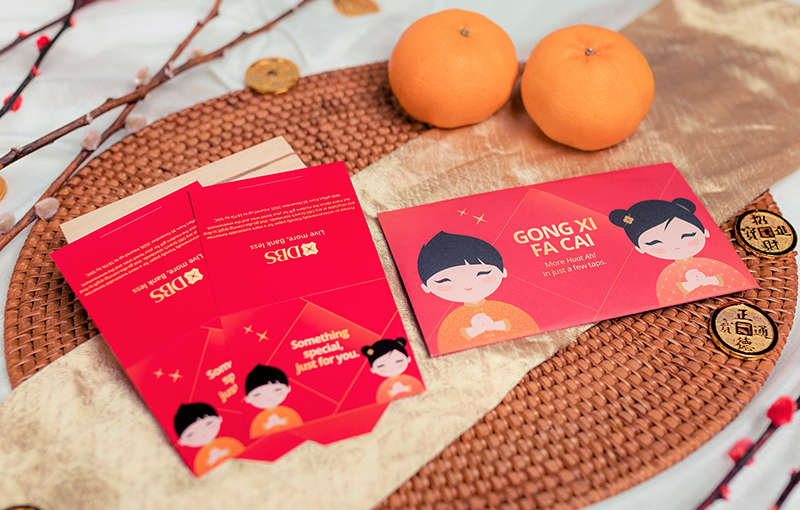 DBS QR Gift cards are physical cards with QR codes for giving and receiving red packet money. The gifter can load a desired value into the card by scanning the QR code using the DBS PayLah! app, and give the card to a recipient like a regular, physical red packet. A receiver can scan the QR code and redeem the value within using PayLah! or PayNow. 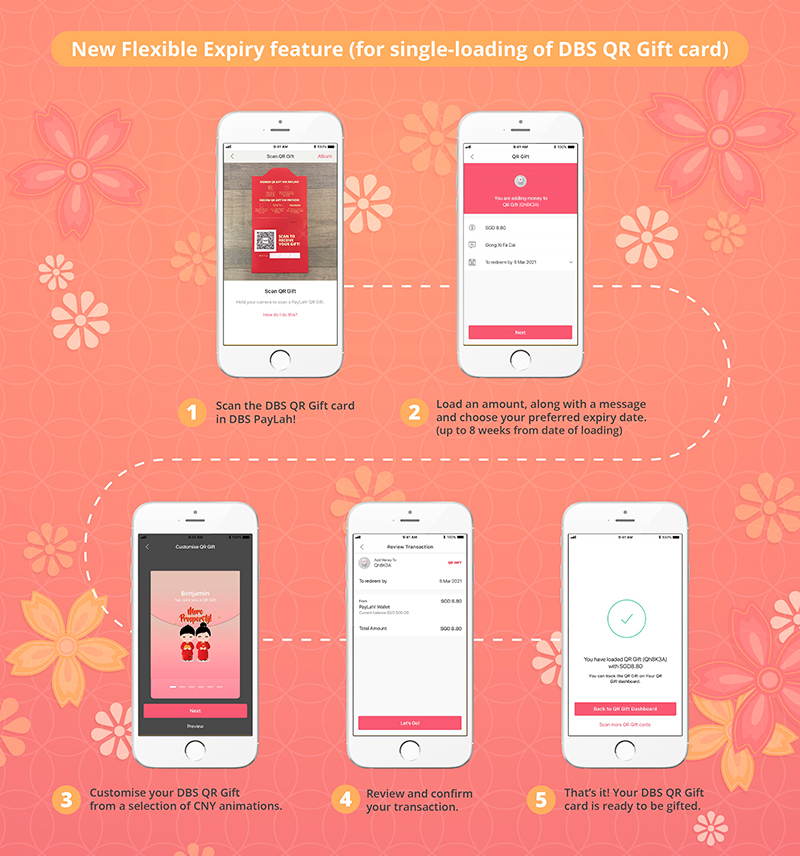 Up to 10 DBS QR Gift cards can carry the same cash value, message, expiry date, and animation, reducing the amount of time spent preparing these angpows. This year's DBS Gift cards come in packs of eight. Each pack features two designs - one CNY-specific, and one generic design suited for other special occasions like weddings and birthdays. They are free and can be collected at DBS and POSB full-service branches or DBS Treasure Centres from 11 January 2021. You can also pick these cards up at POSB's new notes pop-up ATMs from 25 January 2021 onwards. 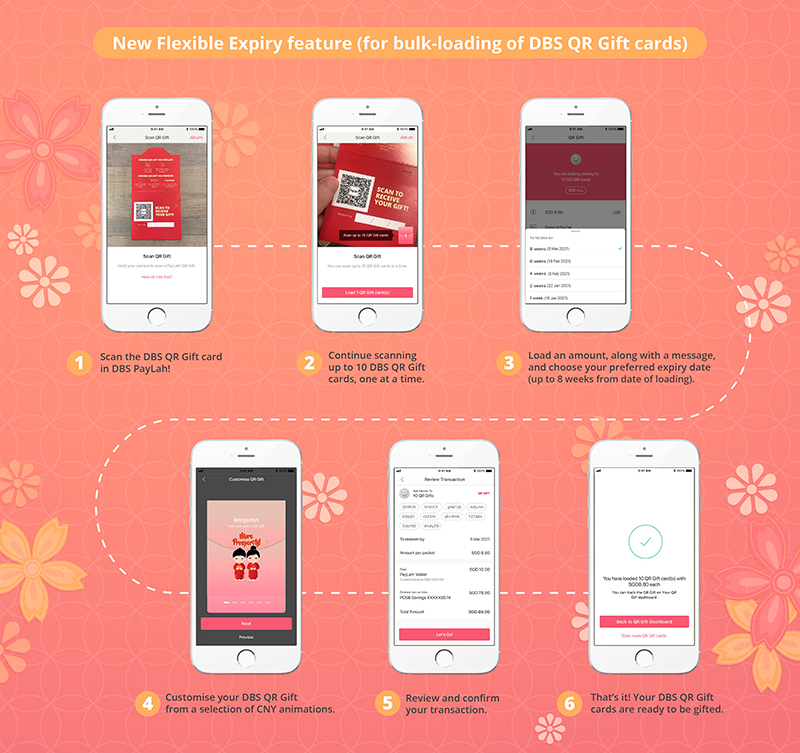 As mentioned, the DBS QR Gift cards come with a new expiry feature. Users can set an expiration date for DBS QR Gift cards up to eight weeks from the date of loading. Unredeemed cards will refund the red packet money back to its giver. The cards themselves have a shelf life of three years.

The DBS eGift alternative is a fully digital version located inside the DBS PayLah! app. Users can select the 'eGift' icon in the app, indicate the amount, recipient, message, and animation. Again, recipients of this digital version can redeem via PayLah! or PayNow. 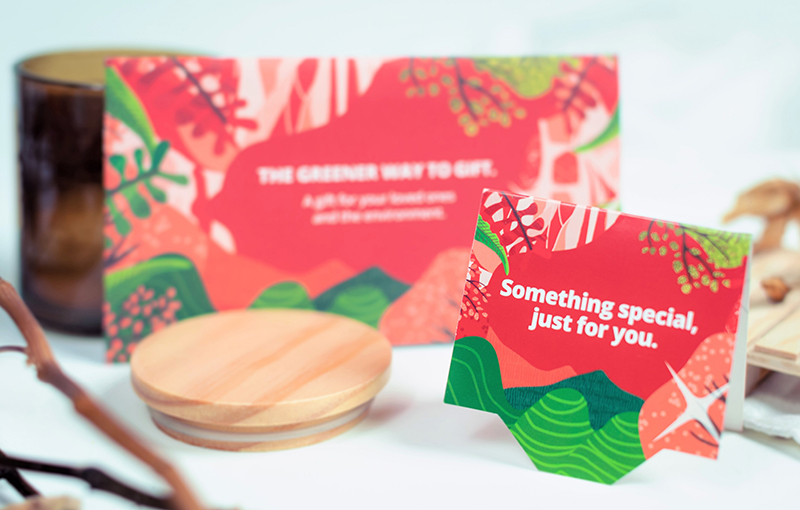 Giving and receiving angpows are serious business. Citing the Monetary Authority of Singapore, DBS said that 330 tonnes of carbon emissions are generated each year in the production of crisp, CNY-ready new notes. The new DBS features help conserve the traditional gifting of red packets during CNY while mitigating environmental and pandemic-related risks. Last year saw triple the usage of DBS QR Gift cards compared to its launch in 2019, and DBS took that as an auspicious sign to continue with this cool party trick.

On a tangentially-related note, DBS will be running a little contest on the DBS PayLah! app from 12 to 26 February 2021, lasting throughout the 15 days of CNY.

In TapLah!, players will have to collect gold coins (worth +3 points) and red packets (worth +25 points), while avoiding bombs (-10 points). Daily prizes of S$88 will be awarded to the top 10 players at the each of each day. a grand prize of S$800 will be given to the player with the highest score in the entire game period.

Join HWZ's Telegram channel here and catch all the latest tech news!
Our articles may contain affiliate links. If you buy through these links, we may earn a small commission.
Previous Story
Sennheiser drops new IE 300 IEMs for discerning listeners on the go
Next Story
Panasonic’s new flagship OLED TV comes with AI optimised content