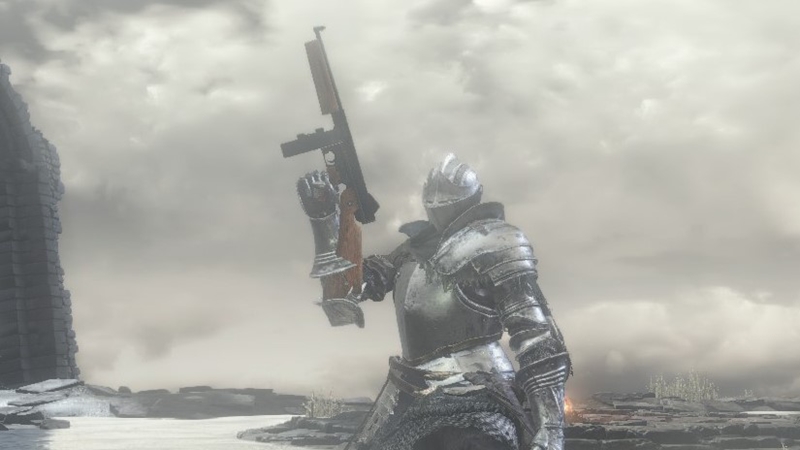 Well, it's about time someone thought of this. Because if swords and airy-fairy magic don't work on those nasty dragons, demons, and whatever the heck is out there, then maybe a good old-fashioned AK-47 will do the trick.

After all, there's nothing out there that screams "insanely difficult" quite like a Dark Souls game, and many players are certain to rack up a high death count playing through any of its three titles. However, there's a cool new mod created by user Asasasasasbc (sic) for Dark Souls 3, titled Modern Firearm which could make things a lot easier, because as its title suggests, it lets you wield a wide variety of rifles instead of the game's conventional weapons.

And...voila! Suddenly the game becomes a walk in the park, with enemies dying by the dozen as you make your way along the path. But if the AK doesn't cut it, then you might want to swap to the sniper rifle - the game doesn't have anything a few .50 caliber shells can't fix. The creator has even gone so far as to include alternative firing modes for each weapon - for example, handling a rifle with both hands allows for automatic fire with lower stamina consumption at the cost of lower accuracy and damage per shot. Oh, and in case you're wondering why the gun models look like those from Resident Evil 3, that's because they were adapted from it by a DeviantArt user named Adngel.

Of course, the mod, like all others are banned in online play, so there's no taking the easy way out in PvP. Nevertheless, it's still a lot of fun to mess around with it in solo. Time to give those pesky monsters their just desserts!

Join HWZ's Telegram channel here and catch all the latest tech news!
Our articles may contain affiliate links. If you buy through these links, we may earn a small commission.
Previous Story
The Singapore Premier League's first esports tournament kicks off on 11 July
Next Story
Google experiments with new Chrome performance feature to extend battery life by 28%