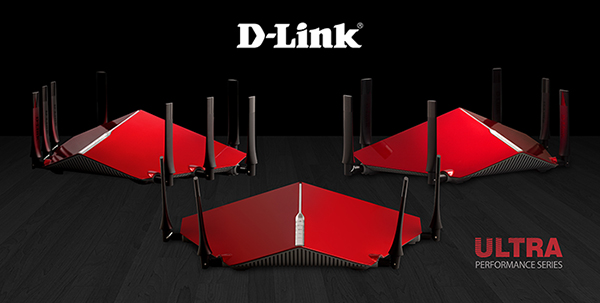 The most impressive is the left most model in the photo above - the 8-antenna DIR-895L/R AC5300 Ultra Wi-Fi router. It is a tri-band router and offers up to 2165 Mbps on both 5GHz bands and 1000Mbps on the 2.4GHz band for a combined maximum throughput of roughly 5300Mbps. Details of this router is scarce at the moment, so we are not sure what chipset it is running and what kind of requirements you would need to be able to enjoy the full speed. However, we fully expect that users would need a compatible 4x4 client to be able to maximize the 2165Mbps speeds of its 5GHz band or the 1000Mbps of its 2.4GHz band.

The right most model is the 6-antenna DIR-890L/R AC3200 Ultra Wi-Fi router. AC-3200 class routers are not new, Netgear has the Nighthawk X6 and ASUS has its own AC-RT3200, and DIR-890L/R shares the same specifications as the Netgear and ASUS routers. This means it is a tri-band router that delivers up to 1300Mbps on its 5GHz bands and up to 600Mbps on its 2.4GHz band for a combined total of 3200Mbps of maximum throughput.

The new routers will also employ a new user interface which will make it easy for users to control their network using their smartphones or tablets. Additionally, one can also expect these routers to have features found on similar high-end routers such as network monitoring, parental controls, guest Wi-Fi networks and advanced QoS features.

The DIR-890L/R AC3200 Ultra Wi-Fi router is available right now with a recommend retail price of US$309.99, whereas the other two routers are only expected to be available in Q2 this year.

Join HWZ's Telegram channel here and catch all the latest tech news!
Our articles may contain affiliate links. If you buy through these links, we may earn a small commission.
Previous Story
Rollkers electronic "under shoes" will let you walk up to 11km/h
Next Story
Panasonic unveils new CX850 flagship 4K TV series