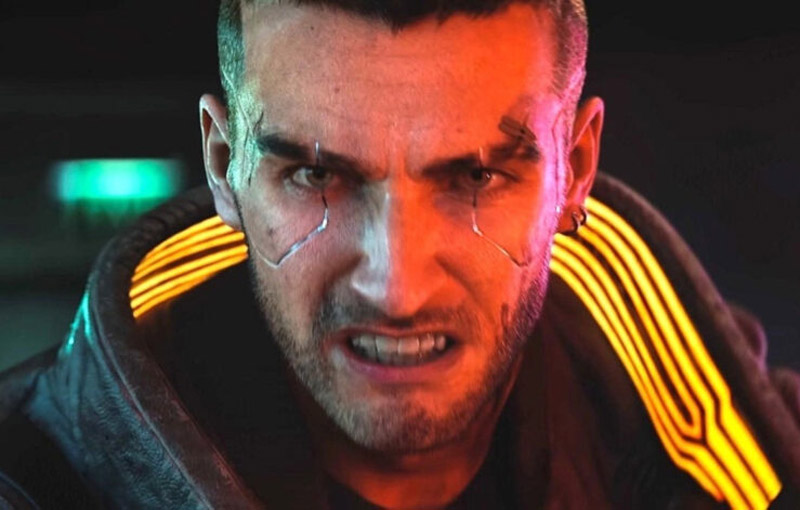 Hey, remember Cyberpunk 2077? After widespread complaints of the game’s shoddy launch state, developer CD Projekt Red has committed to sticking with the game for the long-term and improving it. During an investor call, the company shared a new 2021 roadmap for future updates to the game - but it’s pretty light on the details.

Check out the roadmap below: 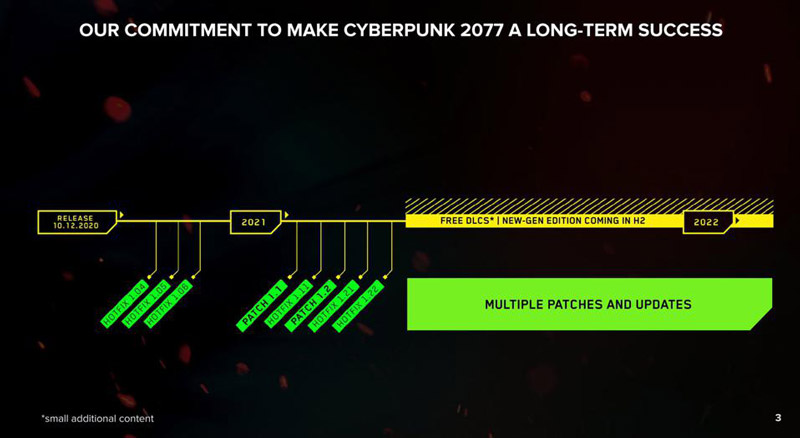 Development roadmaps are meant to bring players (or investors, in this case) clarity on the future of a game, and for Cyberpunk 2077 specifically, they’re meant to tell people what’s getting fixed and when. This fancy new roadmap is frustratingly vague though, listing patches from 2020 before revealing five updates in the first half of 2021. In the second half of the year, we’re getting ‘multiple patches and updates’ in a section clumped together with ‘free DLCs’ and the game’s next-gen edition. What will these patches fix? We don’t know.

Besides the general sense that some updates are coming in 2021, we have no timeline whatsoever for them. We don’t have a specific month for these ‘free DLCs’, which in tiny lettering the developer confirms is actually ‘small additional content’. So expect new cars and clothes instead of more story quests. We have a month left until the second half of 2021 begins, so does that mean the game’s next-gen edition will arrive in August or December? We don’t know, and I’m not sure CD Projekt Red does either. 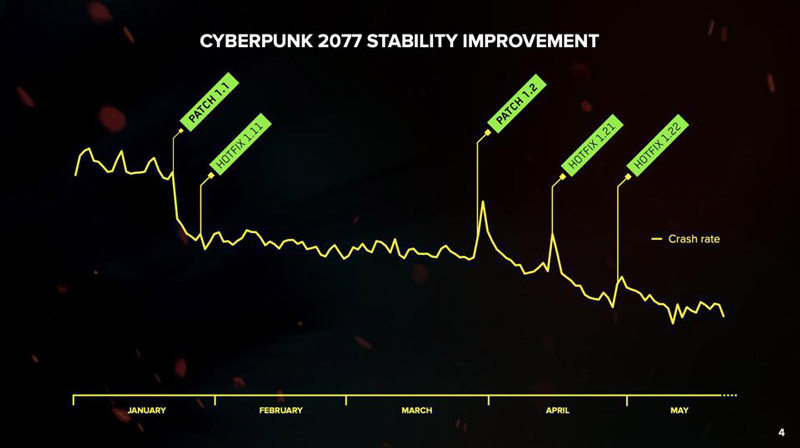 In addition to their hilariously vague roadmap, CD Projekt Red also shared a hilariously vague graph showing off Cyberpunk 2077’s lowering rate of crashes. Graphs with an X axis are typically accompanied with a Y axis, but the studio decided to opt out of mathematical norms this time. The graph merely shows that crashes have been steadily going down since January 2021, but with no numbers included, we have no idea what that means. There’s a big dip from March to April for example, but by how much? It could’ve gone down 5% to 4.9%, or 90% to 3%. Who knows?

Cyberpunk 2077 recently shifted game directors to focus on future expansions, so it’s not like CD Projekt Red is giving up on the game after these patches. It still has a future, albeit a far-off one. For now, the company has yet to get Cyberpunk 2077 back on the PlayStation Store, and continues to battle numerous lawsuits regarding its launch state. Just as a reminder, it was pretty bad at launch.

Join HWZ's Telegram channel here and catch all the latest tech news!
Our articles may contain affiliate links. If you buy through these links, we may earn a small commission.
Previous Story
Improve your home office with the new EverDesk+ standing desk
Next Story
You can watch Raya and the Last Dragon at home via Disney+ for free (Update)