Cyberpunk 2077 has been delayed by five months

Cyberpunk 2077 has been delayed by five months 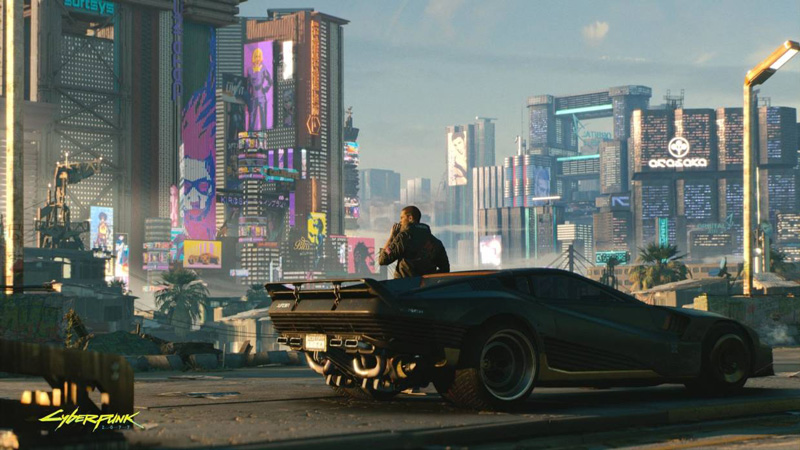 It looks like we won’t be diving into Night City for quite a while.

Cyberpunk 2077, the next game from The Witcher 3: Wild Hunt developers CD Projekt Red, has been delayed. The game’s release date has been moved from its original spot on April 16, 2020, to September 17, 2020. 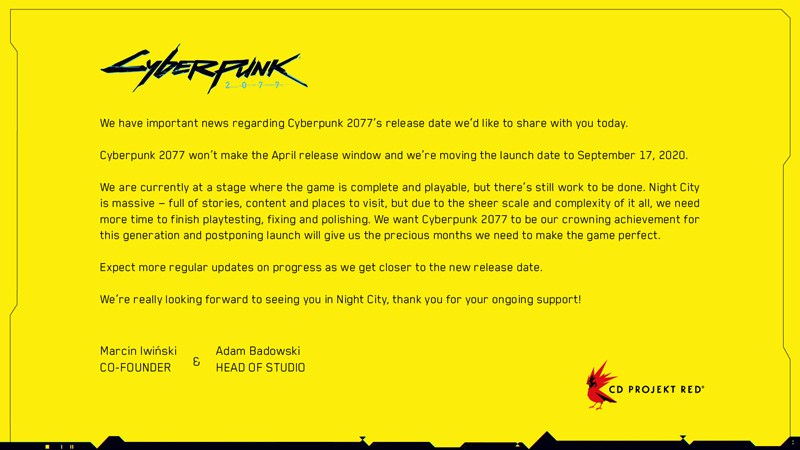 To explain the delay, Marcin Iwinski and Adam Badowski, co-founder and head of studio at CD Projekt Red respectively, released a statement, saying:

We are currently at a stage where the game is complete and playable, but there’s still work to be done. Night City is massive — full of stories, content and places to visit, but due to the sheer scale and complexity of it all, we need more time to finish playtesting, fixing and polishing. We want Cyberpunk 2077 to be our crowning achievement for this generation and postponing launch will give us the precious months we need to make the game perfect.

That’s not all, though. During an investor Q&A session, senior vice president of business development Michał Nowakowski confirmed that the game’s multiplayer component won’t be coming until after 2021.

Given the expected release of Cyberpunk 2077 in September, and frankly speaking of the series of events we expect to occur after that date, 2021 appears unlikely as a release date for the Cyberpunk multiplayer.

CD Projekt Red confirmed that some form of multiplayer mode was in development for Cyberpunk 2077 back in September 2019. They did say it would only arrive sometime after the game’s release, but now that we know it would only arrive in 2022 onwards... would it even still be relevant to the game?

One might think that delaying the game means that developers would get a healthier work/life balance, and avoid the dreaded lengthy crunch times that come with game development. Unfortunately, CD Projekt Red did confirm that the development team will have to work extra long hours anyway, to finish the game ahead of its new release date in September 2020.

In response to a question asking whether the team would have to crunch, Adam Kicinski, CD Projekt Red’s joint CEO said:

To some degree, yes--to be honest. We try to limit crunch as much as possible, but it is the final stage. We try to be reasonable in this regard, but yes. Unfortunately.

Let’s all remember that there are human beings working on this Keanu Reeves game, and a delay only means that the game is coming out more polished, and less buggy and unfinished.

On the bright side, we’ll all have more free time to play the Final Fantasy 7 Remake and Resident Evil 3 Remake in April 2020 now. Check out other big 2020 game release dates here!

Join HWZ's Telegram channel here and catch all the latest tech news!
Our articles may contain affiliate links. If you buy through these links, we may earn a small commission.
Previous Story
PlayStation 4 exclusive Horizon Zero Dawn is reportedly coming to PC
Next Story
Nike has struck up a partnership with T1 Esports