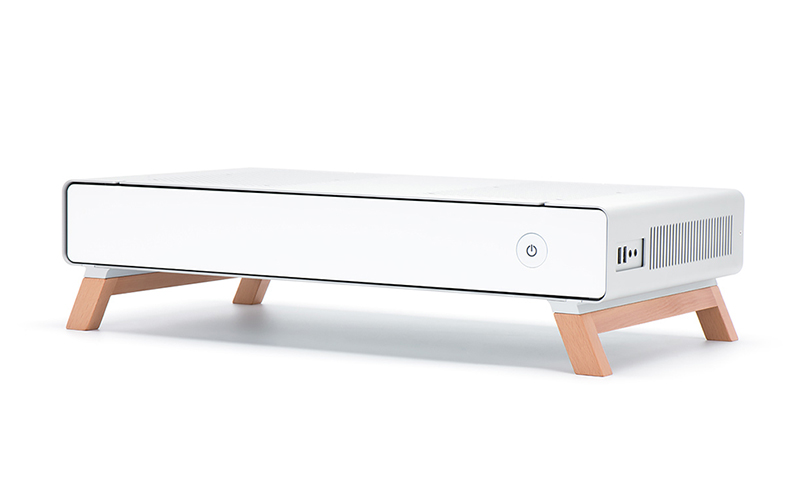 The Taku has been under development for a few years, and Cryorig also worked for around a year with manufacturing partner Lian-Li to co-develop the chassis. Given the latter’s role in the design process, the clean, minimalist aesthetic of the Taku shouldn’t come as a surprise.

The case is supported by four handcrafted solid wood struts, and the monitor sits on top of it. It’s an elegant solution, and there’s room for you to slot a full-sized keyboard under it when you retire for the day.

The Taku comes only in silver and is constructed out of anodized sandblasted aluminum. The front panel is undisturbed by any line breaks or unnecessary design elements, and you’ll find just a single power button on the right.

The top and bottom feature ventilation holes for cooling, with the top vents located closer to the sides to make room for the monitor. The chassis can supposedly take screens up to 15kg.

There are ventilation cut-outs on the side panels as well, and you’ll find two USB 3.1 (Gen 1) Type-A ports and microphone and headphone jacks on the right.

The chassis features an internal system tray that slides out, but it can also be detached from the main body of the case by pushing down on two plastic tabs on each rail.

You’ll find room for a mini-ITX motherboard and SFX (or SFX-L) power supply inside, in addition to up to 280mm of clearance for graphics cards. That said, you’re limited to mostly dual-slot models, and you may have to remove the 2.5-inch drive cage to make way for larger cards. Furthermore, the orientation of the PCIe expansion slots means that the GPU is meant to lie parallel with the motherboard, which you’ll be able to achieve using the included riser cable.

As for storage options, the Taku will take up to two 2.5-inch SSDs and one 3.5-inch HDD. It also comes pre-intalled with a single 92mm fan.

Cryorig paid attention to external cable routing as well, with routing holes on either side that let you run things like charging cables from the back to the front while keeping them hidden.

The Taku retails here at S$559, but there’s a S$519 launch promotion going on. The first shipments will arrive after the Chinese New Year, according to Cryorig, after which you'll be able to buy it at Sim Lim Square stores like Fuwell, PC Themes, and Media Mart.

Join HWZ's Telegram channel here and catch all the latest tech news!
Our articles may contain affiliate links. If you buy through these links, we may earn a small commission.
Previous Story
Kodak says over 40,000 investors have already expressed an interest in KODAKCoin
Next Story
Huawei will not unveil its flagship phone at MWC 2018