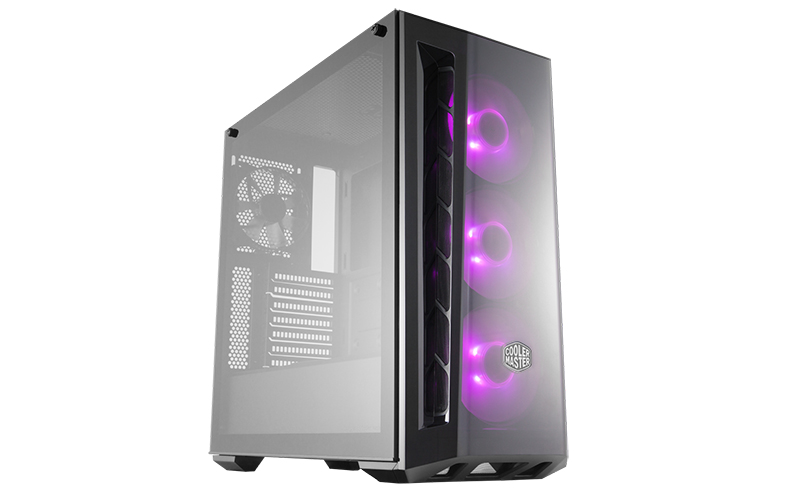 Cooler Master has announced the MasterBox MB511 RGB, an affordable chassis with a sleek design and plenty of room for high-end components.

The edge-to-edge tempered glass side panel lets you show off all your hardware, while large intakes on each side of the front panel ensure sufficient airflow. The latter is combined with a mesh front panel, so your powerful components shouldn't suffocate inside the case. Cooler Master says the large side intakes were inspired by the design of fast cars, and they do give the chassis a more aggressive look.

The MasterBox MB511 RGB also ships with three 120mm RGB LED fans at the front. You can control these using the included RGB controller and tweak the lighting effects directly from the I/O front panel. Alternatively, you can hook the fans up directly to your motherboard to control the lighting. Cooler Master says it will work with motherboards from ASUS, Gigabyte, MSI, and ASRock, so most folks should be covered.

Elsewhere, the chassis has room for a total of six 120mm fans and support for front, top, and rear radiator placements should you wish to go down the liquid-cooling route.

It'll also hold the largest graphics cards, with support for cards up to 410mm in length. A PSU shroud helps keep your build looking neat and tidy, and you can also mount an extra SSD on it for additional storage. A further five SSD mounts are found behind the motherboard, which should help with creating a cleaner build. There's also a good 19mm of clearance behind the motherboard tray, so cable routing and management should be slightly easier.

Finally, there's  a small drive bay in the main compartment that will hold up to two 2.5-inch/3.5-inch drives.

Join HWZ's Telegram channel here and catch all the latest tech news!
Our articles may contain affiliate links. If you buy through these links, we may earn a small commission.
Previous Story
You'll soon be able to send stickers to your friends in WhatsApp
Next Story
Nokia and Samsung extend their multi-year patent license agreement