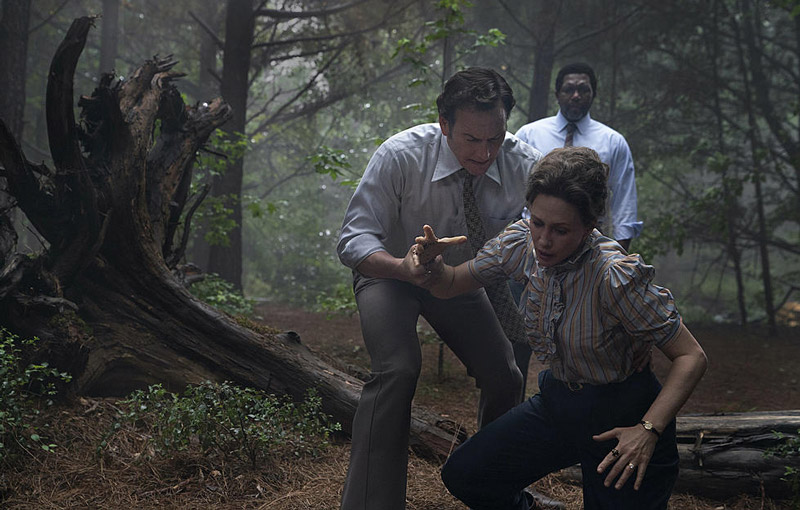 It's been a while, but the Warrens are back.

Warner Bros. Pictures have dropped their first trailer for The Conjuring 3: The Devil Made Me Do It. This trilogy-capper has the demonologist couple Ed and Lorraine Warren (Patrick Wilson and Vera Farmiga) return in their most prolific spooky case yet.

This installment of the Conjuring franchise is based on the real-life trial of Arne Cheyenne Johnson, which was famously the first court case in the US in which the defendant claimed that they were possessed by a demon to deny responsibility for a crime. In this case, the crime was murder. The Warrens were actually involved in the real-life trial this was based on, and it looks like they’ll have a difficult time proving that demons exist in a court of law.

The horror movie’s first trailer shows off some of its upcoming scares - such as a young boy lying on a waterbed before a demon reaches up from inside to grab him. It’s very reminiscent of A Nightmare on Elm Street. The Conjuring movies follow a larger arc of Lorraine Warren slowly but surely losing control of her ability to see demons and supernatural visions. That escalates further here, where she seems to be drawn into another ghostly world, losing sense of reality and almost plummeting off a cliff before Ed snaps her out of it.

Unlike past entries in this trilogy, The Conjuring 3: The Devil Made Me Do It will not be directed by James Wan. The movie is instead helmed by Michael Chaves (The Curse of La Llorona) with Wan producing. The movie hits theaters and HBO Max on 4 June, 2021. There aren’t many horror movies to look forward to this year (besides Halloween Kills), so this will be a nice spooky treat!

Join HWZ's Telegram channel here and catch all the latest tech news!
Our articles may contain affiliate links. If you buy through these links, we may earn a small commission.
Previous Story
Electronic Arts announce two new Battlefield games coming to consoles and mobile
Next Story
Google Meet for Android and iOS now helps to conserve precious mobile data during use