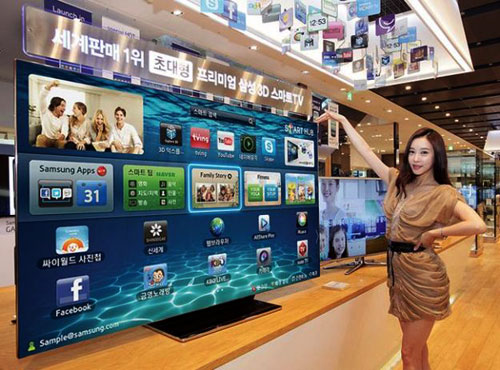 Some of you may have heard that Samsung unveiled its 75-inch whopper of an LED TV on-board the USS Intrepid aircraft carrier recently to much fanfare.

But importantly, we've just received word from the CE giant that they'll be bringing in the massive 3D-capable ES9000 to our sunny island in the months ahead, following the recent launch in South Korea which revealed that the display comes with an equally staggering cost of US$17,463. Besides the TV's generous screen estate, the 75ES9000 will also feature a slim 0.31-inch bezel, framed in a rose-gold finish quite unlike anything we've seen from Samsung so far.

Similar to its current ES8000 and ES7500 series, the ES9000 will sport a camera required for its "Smart Interaction" motion-control and face recognition features. The latter acts as a secure log-in option to social networking sites as well as other applications such as Samsung's TV app store. Other perks of the ES9000 include Micro Dimming, Precision Black Local Dimming, and a dual-core processor. And like most of Samsung's latest range of premium Smart TVs, users will also have a choice of using Samsung's mobile app to control or navigate the slim beauty.

Watch this space for more updates!

Join HWZ's Telegram channel here and catch all the latest tech news!
Our articles may contain affiliate links. If you buy through these links, we may earn a small commission.
Previous Story
Alleged Photos of iPhone Nano SIM Tray and Home Button Leaked
Next Story
MSI Introduces OC Certified Motherboards