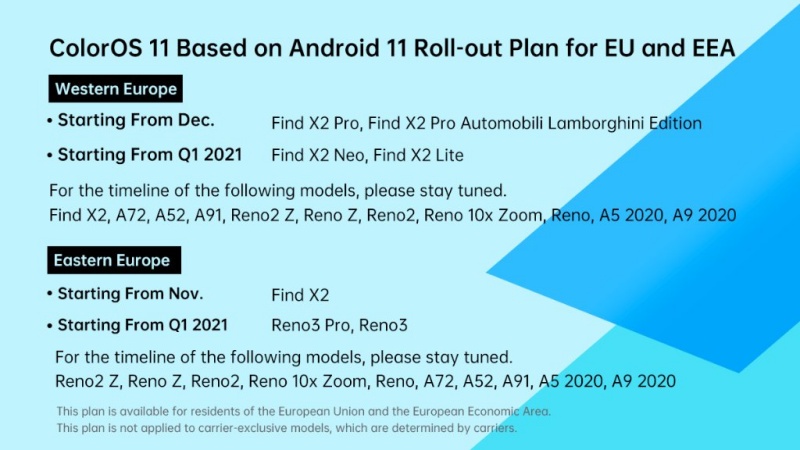 A huge leap from ColorOS 7, Oppo explains that it wants users to know that their phones are based on Android 11. The Chinese company also took the opportunity to highlight that it has shortened the waiting period for users to run the latest Android OS. While it took 321 days for Oppo to roll out Android 9 in 2018 and 83 days to roll out Android 10 last year, the company released ColorOS 11 on the same day as Android 11.

One of the main features of ColorOS 11 is the Three-Finger Translate, which Oppo worked with Google to to bring it to Google Lens. Users can take a screenshot with the three-finger gesure and instantly translate the content to any language. The other key feature of ColorOS 11 is the Always-on Display. It has a wide variety of styles and pattersn for users to personalise.

ColorOS 11 brings new font options via Oppo Sans, where users can select different fonts for the UI and adjust the font sizes according to their preferences. There is also Dark Mode which comes in three colour schemes: pitch dark, blue dark and gray dark. In addition, Dark Mode can be adjusted on the icons and wallpapers on the homescreen to match the rising and setting of the sun.

Another cool feature of ColorOS 11 is Oppo Relax is The Sound of the Cities from Oppo Relax. Users can enjoy the sounds of local markets, ocean waves crashing onto the shores, and birds chirping from different countries such as Bangkok and Iceland. To make multitasking easier, ColorOS 11 introduced FlexDrop where users can resize apps into small floating windows or even smaller mini-windows.

ColorOS 11 has a Super Power Saving Mode, which allows the phone to be on standby for 12 hours, or text for 90 minutes or make phone calls for an hour with just 5% battery! Overall, ColorOS 11 boasts 32% better response rates, 45% better RAM utilisation and 17% better frame rate stability to offer a better and more seamless user experience.

ColorOS 11 will be released by Oppo in two phases. The first phase, which starts today, will be based on Android 11 Beta and is coming to the Find X2 series. The Reno 3 and F17 Pro are scheduled to get it from the end of the month while the software update is slated to roll out gradually across the Reno4 family from October to December. The other devices such as Reno 10X Zoom, Reno2, Reno Z, A5 2020 and A9 2020 will get the update in Q1 and Q2 2021. The second phase, which starts in December, will be based on Android 11 and roll out in different timelines for Western and Eastern Europe.