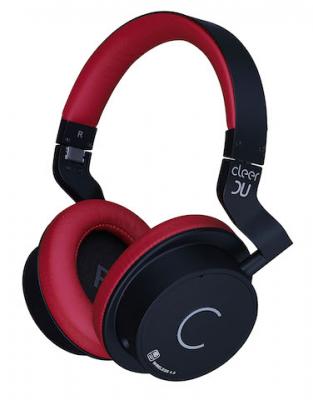 CES 2016 (Consumer Electronics Show) will see a world’s first by Cleer Audio it seems. The new Du Wireless headphones will be the first wireless headphones to feature dual 40mm neodymium drivers for fantastic audio performance throughout the audio spectrum.

The headset will use the latest AAC/AptX Ver 4.0 lossless high quality codecs for optimal Bluetooth transmission to allow for true high definition wireless audio playback. NFC is supported for easy pairing, and the quick-charge rechargeable lithium battery delivers up to 20 hours of uninterrupted music playback. There’s an LED indicator for battery capacity, but you also have the option of plugging in a regular cable to bypass the wireless functions if you’re on a plane or if the battery runs flat.

Cleer says the headphones also feature “innovative sound technology” that allow the neodymium drivers to deliver “true bass” that you can feel no matter the volume level. No pricing has been announced yet, but we can probably expect these to be sold shortly after their showcase at CES 2016.

Join HWZ's Telegram channel here and catch all the latest tech news!
Our articles may contain affiliate links. If you buy through these links, we may earn a small commission.
Previous Story
Look out for the Intel Skylake-based NUC with Thunderbolt 3 support
Next Story
Intel Skylake bug causes systems to crash when calculating prime numbers