Not just a numbers game: Here's why Circles.Life is more than just a telco

Not just a numbers game: Here’s why Circles.Life is more than just a telco 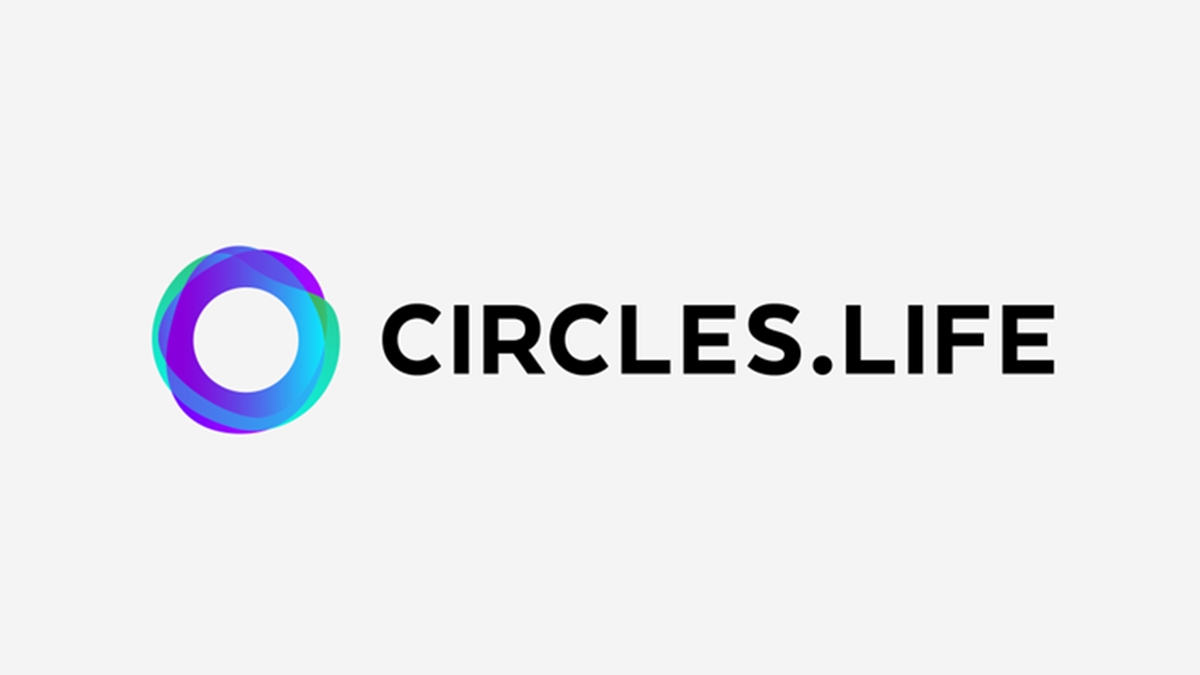 These days, it’s amusing to see how most people wouldn’t even blink at seeing a 50GB mobile data package, despite the fact that the average person only uses up to around 24GB of mobile data each month.

Case in point, that’s not even half of that beefy 50GB plan you might have signed up for, and as far as mobile plans are concerned, consumers should always look beyond the horizon. Short-term benefits and immense data allowances are all well and good, but at the end of the day, Circles.Life wants to provide the best it can for its customers, and it has indeed stuck true to that objective in some very unique ways!

Now, it’s easy for any company, much less a telco to declare that it rewards its community. But putting it into practice is an entirely different story, and for Circles.Life, that involves celebrating its community and everyone’s individual “weirdness”.

In March this year, the telco rolled out the very aptly-named #theweirdchallenge on Instagram, inviting any and all users to post an Instagram Reel of themselves embracing their quirks. The winners of the challenge received up to S$10,000 in cash along with a 1-year Unlimited Plan from Circles.Life, while the winners of community categories like Crowd Favourite and the Out of this World Award snagged everything from $1,000 cash to a brand-new Samsung Galaxy S22.

Following that festival of “weirdness” in March, Circles.Life rolled out its #BeBold campaign in April, which encouraged the community to take a step out of its comfort zone. Users were polled on things that they’d always wanted to do but never had the courage to, and the top response (selected by a community poll on Instagram) stated that they'd like to hop on a plane and fly out of town for an impromptu getaway.

This is where Circles.Life stepped in to help, gifting them a S$500 FlightGift voucher as well as a full waiver of GoRoam services throughout the duration of their overseas travel!

Looking forward, Circles.Life certainly has more planned for the community in the months ahead. On top of regular Instagram giveaways for items like iPads, S$50 Grab Vouchers, and Popular Artiste Merchandise, the telco is also hosting a special summer giveaway for those who sign up and activate their SIM cards by 29 July. By completing in-app Quests, users can spin a prize wheel featuring Flight vouchers for the whole family to enjoy! 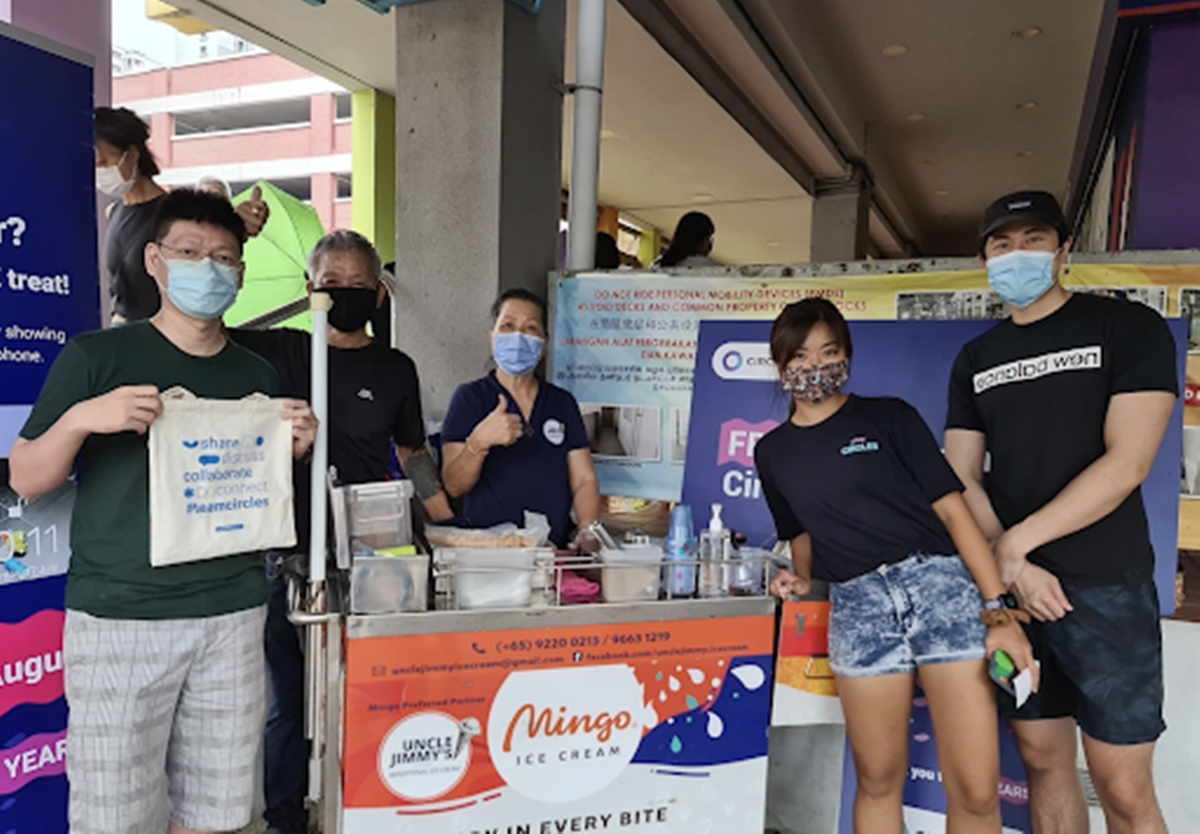 Apart from giving away loads of freebies and rewards to the community, Circles.Life has also placed great emphasis on giving back to it. In tandem with the telco’s 5th birthday celebration in August 2021, it also introduced Project Sprinkles, an initiative that focused on helping local businesses that had suffered as a result of the circuit breaker measures. Some of these partners included the duo of Ice Cream Cart sellers, Uncle Jimmy and Uncle Chieng, who gave away a free scoop of ice-cream to Circles.Life customers at Whampoa, Serangoon, Ang Mo Kio, and Takashimaya.

Later that year, Circle.Life also introduced its A Circles Life Christmas, where the telco delivered mystery gifts to their customers’ loved ones. These nominations would be gathered anonymously from the community itself, and the top nominations would receive freebies (sometimes from Circles.Life’s very own Santa himself!) like telco merchandise, Milo, cookies, and even a physical certificate stating their admission into Santa’s “Official nice list”.

Circles.Life has also celebrated Circles Day earlier this year on 14 March, a date more infamously known as International Pi Day - the irrational number commonly used to calculate the dimensions of circles and spheres. They encouraged Singaporeans to embrace their quirky qualities and what makes them so unique, and users could redeem everything from cups of Flash Coffee to 2-week trials at F45 gyms and discounts for VIU subscriptions just by participating. It’s arguably one of the more fun initiatives ever developed by a telco, and the aforementioned #theweirdchallenge was a big part of this celebration as well. 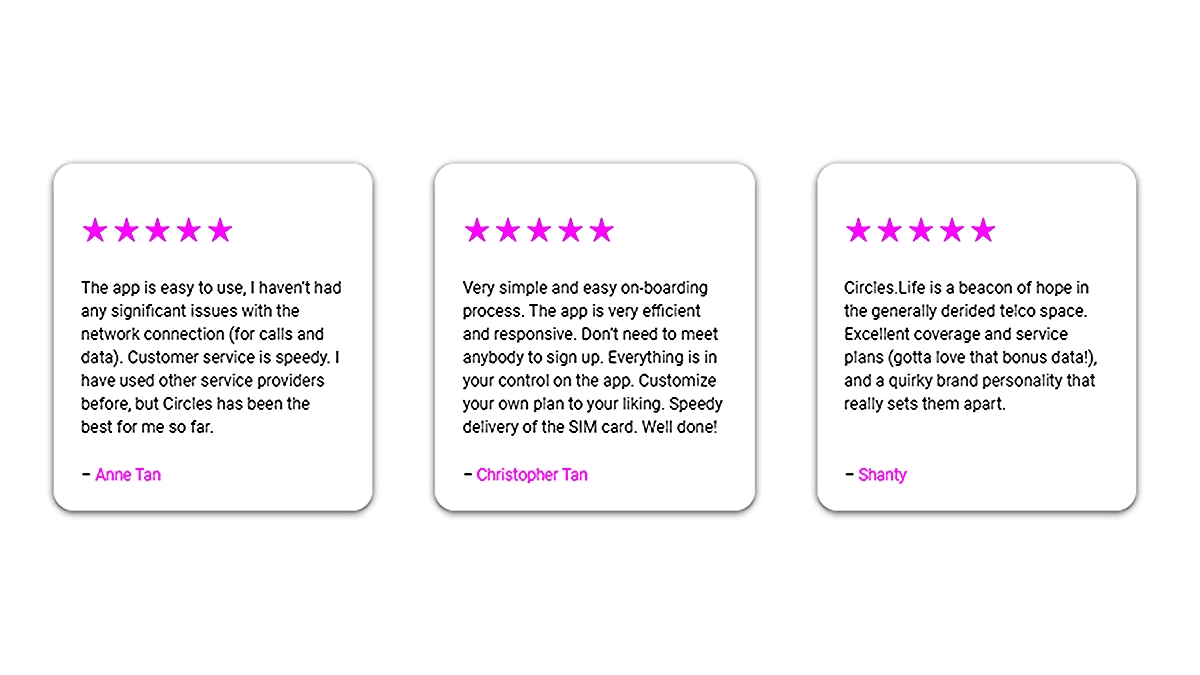 Of course, none of these initiatives would have been realised if Circles.Life wasn’t keeping up with its community. It believes in constant improvement by listening to its customers, and unlike most other telcos that develop their mobile plans and offerings based on what their competitors bring to the table, Circles.Life instead chooses to focus on what their customers are asking for.

1) Plans are created because customers needed it

As noted above, most people who sign up for mobile packages these days tend to end up with lots of data left to spare each month. In order to help customers make full use of the data they’re paying for, Circles.Life instituted the Multi-SIM plan, which allowed a single mobile data plan to be shared concurrently between a maximum of three devices. This simple yet innovative move allowed the telco to set itself apart within the MVNO space, carving out a niche that it still holds today.

On top of that, the telco’s in-app Quests are also a product of this customer-centric mindset. People wanted to be rewarded for staying with Circles.Life, and so the telco came up with a method for them to do so. It has proven to be immensely successful too. To date, Circles.Life has given out over S$120,000 worth of cash prizes, over 100 sets of Airpod Pros, and over 50 iPads, to say nothing of conventional telco prizes like free data and mobile packages.

Last but not least, wrapping up their immense swath of offerings and contests is solid customer service. The Circles.Life team is almost always on standby, and they even offer Live Chat on Circles App and Facebook Messenger from 8am-11pm daily. After all, staying committed and more importantly, connected to customers is what all companies, much less a telco, should strive to achieve, and having reliable services like these is certainly the cornerstone.

For more information on Circles.Life and its variety of plans and initiatives, hop on over to the telco’s official website.

Our articles may contain affiliate links. If you buy through these links, we may earn a small commission.
Previous Story
Samsung in talks with Telsa on possible deal to supply camera modules
Next Story
LEGO's brand-new 2,807-piece Bowser model stomps into stores on 1 October