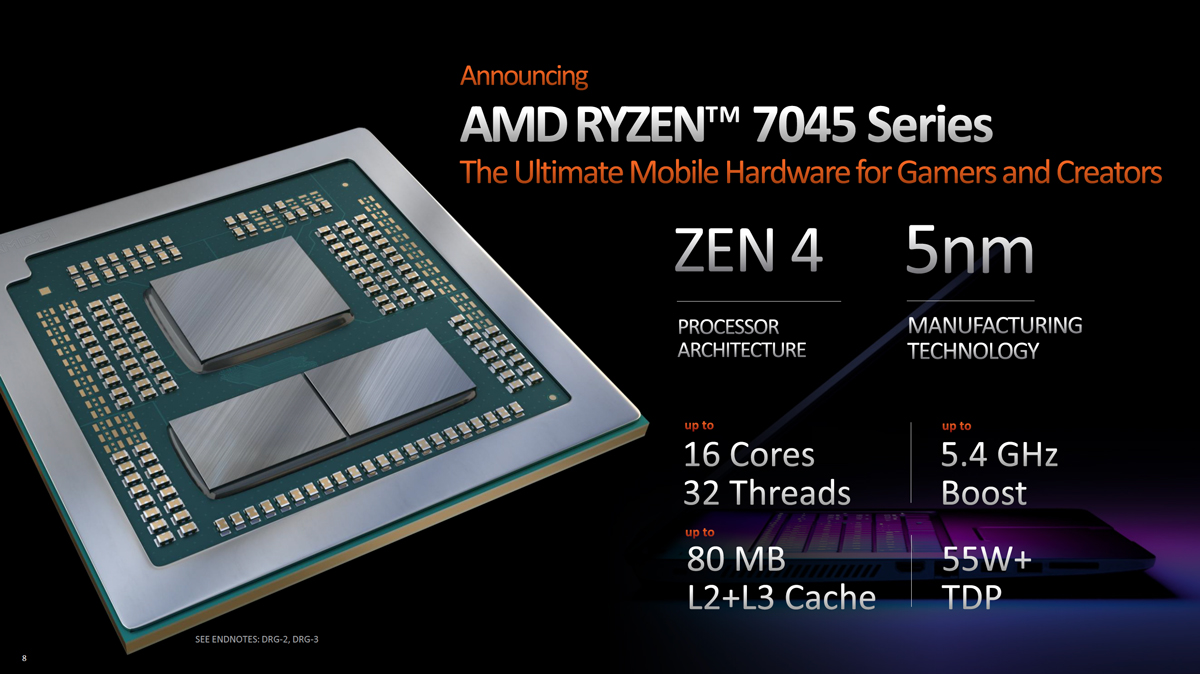 Besides revealing its Ryzen 7000 X3D series of CPUs, AMD also announced a new line of Ryzen 7000 mobile CPUs for laptops. The selection includes various processors with a range of architectures (a strategy that's been used for some time now) that includes Zen 4, Zen 3 Plus, Zen 3, and Zen 2. They also pack differing integrated graphics engines (RDNA 3, RDNA 2 and Vega) to address the intended user group. Here's a quick overview of the new lineup:- 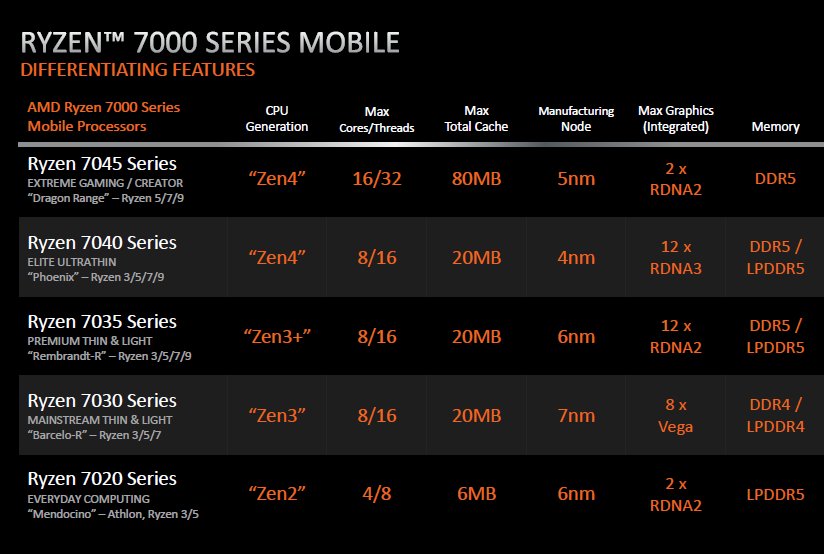 For the extreme creators - Ryzen 7045 Series

For the focus of this report, we'll be keeping close tabs on the newer Zen 4 architecture-based mobile processors, and the top-of-the-line stack is the "Dragon Range" Ryzen 7045 Series targeted at extreme creators and gamers. Naturally, these chips will focus on high frequencies, lots of cores, cache, but would rely on discrete graphics to primarily drive the high-end experiences. Despite that, the Ryzen 7045 series will have a small integrated graphics engine, the Radeon 610M, powered by two Compute Units of RDNA2 graphics engine - exactly the same configuration on the desktop Radeon 7000 series as well. This is to directly take advantage of the powerful video encoding (H.264 and H.265) and decoding (even has AV1 support) functionality built-in the CPU without relying on external graphics and consuming unnecessary power. 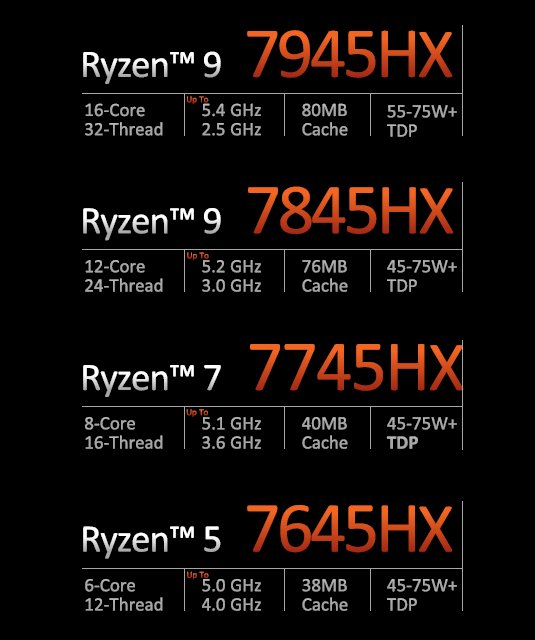 One standout processor in this series is the Ryzen 9 7945HX, which has a formidable 16 cores and 32 threads, with frequencies ranging from 2.2GHz to 5.4GHz, 80MB cache, and a TDP of between 55-75 watts. This is a rare and impressive feature in a laptop, as the 16 cores are full Zen cores rather than the smaller efficiency cores often found in laptops.

While this processor may seem like an underdog compared to Intel's new top-of-the-line 13th-Gen chips, which have a maximum of 24 cores, it is important to note that Intel's Core i9-13980HX, which is marketed as the "world's fastest mobile processor," only has 8 performance cores and 16 efficiency cores. In contrast, all 16 cores of the Ryzen processor are high-performance cores capable of running at full speed. Essentially, the Ryzen processor is equivalent to having two full 8-core chips combined into one. 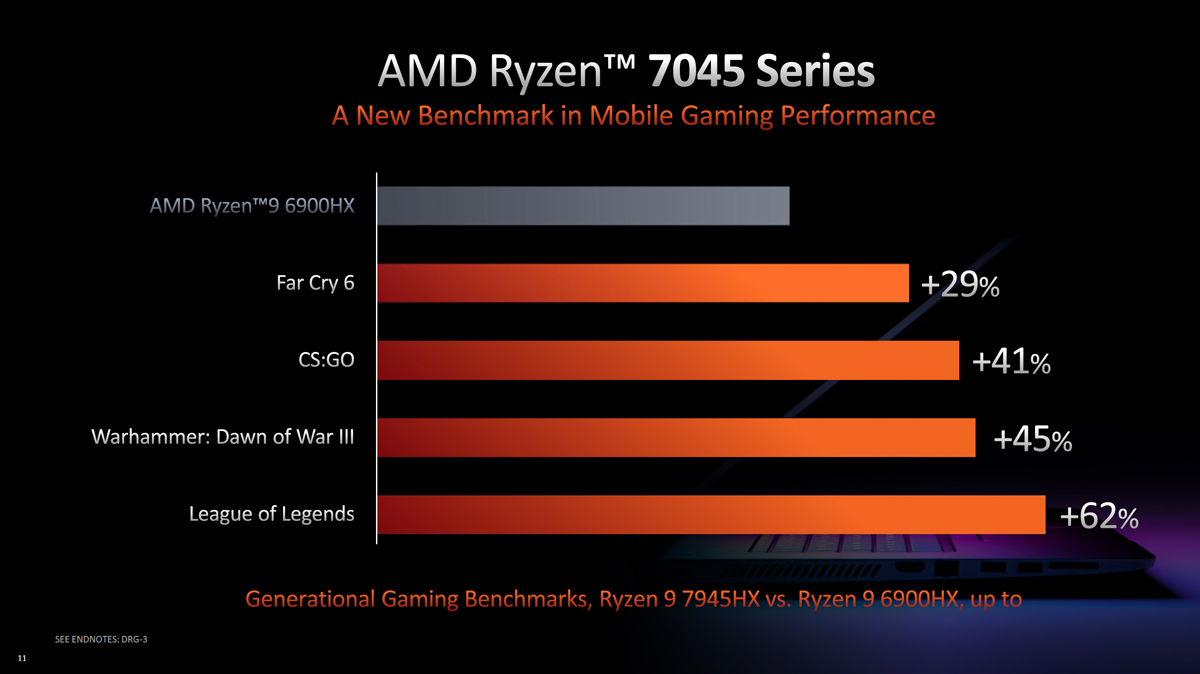 It is currently unclear how well these two mobile processors will perform in comparison to each other and whether either of them will have any notable impact on their respective markets until they have been tested. However, based on the current information available, the Ryzen 9 7945HX appears to be a strong competitor. AMD has stated that these chips will offer a 78% increase in Cinebench performance compared to the Ryzen 6900HX from the previous year. Given the impressive specifications of the 7945HX, this claim seems plausible.

This leader of the pack is expected to be featured in some of the most high-end and expensive Ryzen gaming laptops of the year, such as the Alienware m16 and m18 (which have received the AMD Advantage label, similar to Intel's Evo program), the new ASUS ROG Strix, and Lenovo's Legion line.

The heart of an ultimate ultrathin laptop - Ryzen 7040 Series 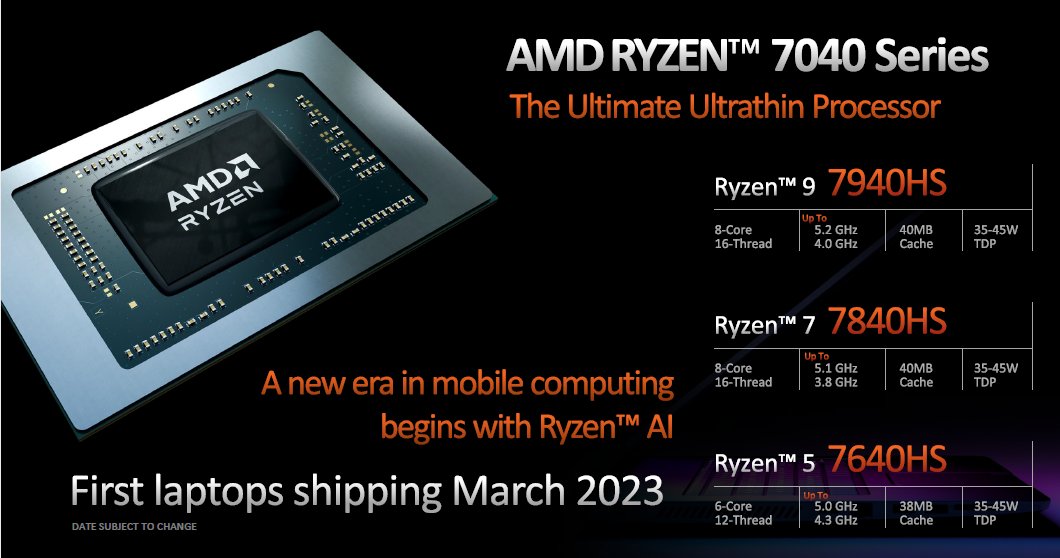 Moving on to the less extreme, but still powerful options, the Ryzen 7040 series is also built on Zen 4 architecture and is somewhat equivalent to the Intel H-series processors with a rated TDP of 35 to 45W. Its Ryzen 9 7940HS and Ryzen 7 7840HS both have 8 cores and 16 threads, 40MB cache and a boost frequency of up to 5.2GHz. The Ryzen 5 7640HS is no slouch either with six powerful cores, as well as high frequencies and cache size that are almost similar to the other two models.

What's most interesting about the Ryzen 7040 series is that it's the world's first integrated AI engine on an x86 processor. Dubbed AMD Ryzen AI, it's based on AMD's XDNA adaptive AI architecture that's made to shore up AMD's entire product roadmap to have integrated AI engines to truly embrace heterogeneous computing and to carry it out efficiently.

While Intel's recent generation of CPUs have a Deep Learning  (DL) Boost instruction set feature support and both 12th and 13th-Gen Core processors have a standalone matrix engine for AI acceleration, they are very targeted to tackle particular instruction types only. Plus, you probably can't multi-task AI processes, which a dedicated purpose-built core can address. For those following tech updates closely, you'll also remember that Intel just announced a dedicated VPU for AI acceleration that works in tandem with the 13th Gen Core mobile CPUs, but this is a standalone co-processor.

The AMD Ryzen AI is a dedicated engine that's on board the Ryzen 7040 series that's made to tackle up to four concurrent AI streams for real-time multi-tasking and claims to be up to 35% more responsive than single-stream AI engines.

Aren't discrete GPUs great for tackling AI-related compute? This is true, but it takes place deep within the GPU pipeline which incurs a higher power penalty and is highly dependent on the GPU core paired. This is why the Ryzen 7040 features a dedicated integrated AI engine to keep it efficient and tackle everyday cutting-edge tasks effectively, but the top-end Ryzen 7045 that's meant to pair with high-end discrete GPUs doesn't have the Ryzen AI engine integrated.

Speaking of graphics, the Ryzen 7040 series is also endowed with the most powerful integrated graphics engine ever on a CPU - up to 12 Compute Untis of RDNA 3 graphics architecture - and the most capable of the Ryzen 7000 mobile processor series. That's like having 1/8 of the power on the Radeon RX 7900 XT (has 84 RDNA 3 Compute Units) packed onboard the CPU. Here's the exact GPU config to be expected:-

Going by the performance figures of this Radeon RX 7900 series, the graphics engine on the Ryzen 7040 series CPU should easily tackle most games at 1080p resolution when quality settings are dialled down to something modest and is probably only held back by the lack of local video memory.

The Zen 3+ 7035 series is being marketed as having "incredible battery life", while the Zen 3 7030 series is said to have "proven great battery life". Not much details have been furnished, but these are basically re-hashed Ryzen 6000 series mobile (Zen 3+) and Ryzen 5000GE series (Zen 3) desktop processors with slight tweaks in clock speeds and configuration for optimal efficiency in a mobile platform. Even the graphics engines are the same and are based on RDNA 2 and Radeon Vega respectively. Here's what we gathered from AMD's laptop processor listing page.

The first laptops with the Ryzen 7030 and 7035 series will begin shipping in January, while top-shelf Ryzen 7045 series are expected to be released in February, and lastly the Ryzen 7040 series for ultrathin performance series is set to debut in March.