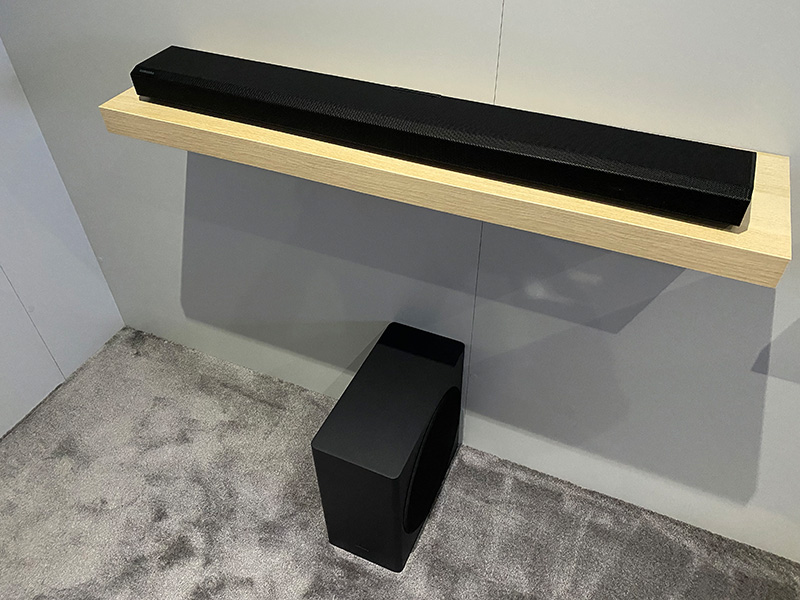 First published on Jan 6 at CES, this article has been updated to include the prices of the soundbars.

Alongside new 8K and 4K QLED TVs, Samsung has also unveiled new soundbars for the year at CES.

If you’re looking for changes over last year’s range, the most obvious structural change is that the Acoustic Beam openings at the top of the midrange soundbars this year — Q800T and Q70T — have been moved forward to ensure that the sound reaches you clearly and isn’t obstructed by any TV hanging above. The new Acoustic Beam 2.0 unit itself also gains a wide-range tweeter to deliver a more natural sound range and a wider soundstage.

Lineup-wise, the flagship this year is the Q950T (yup, the soundbars use the same naming scheme as the QLED TVs), which is a 9.1.4-channel setup with bundled wireless rear speakers and a new 8-inch wireless subwoofer.

A step down is the Q900T, which is a 7.1.2-channel system that also uses the new 8-inch wireless subwoofer. Like the Q950T, it has up- and side-firing speakers and support Dolby Atmos and DTS:X object-based surround sound.

For those who don’t want to spend top dollar but still want a fairly premium system, the Q800T may just fit the bill. Like the 9 series soundbars, this 3.1.2-channel soundbar supports Dolby Atmos and DTS:X and voice control. But instead of having speakers that fire upward and from the sides, it uses Acoustic Beam 2.0 to create the directional sound.

The last two models in the Q series are the Q70T and Q60T. Expectedly, the 3.1.2-channel Q70T is the more full featured of the two as it supports Dolby Atmos and DTS:X, Acoustic Beam 2.0 and Wi-Fi. On the other hand, the 5.1-channel Q60T supports Dolby 5.1 and DTS Virtual:X (basically, virtual surround), Acoustic Beam (version 1) and Bluetooth connectivity (but not Wi-Fi). Both soundbars come with a 6.5-inch wireless subwoofer.

Last but not least, all the Q series soundbars this year support Q-Symphony, which is a fancy way of saying they work with the 2020 QLED TVs’ built-in speakers to create an even more immersive surround sound experience. If for some reason you’ve bought one of these new soundbars to pair it with a non-Samsung TV (or an older Samsung TV), the Q-Symphony feature won't work because onboard TV speakers are typically muted automatically when audio is piped to an external audio system.

Join HWZ's Telegram channel here and catch all the latest tech news!
Our articles may contain affiliate links. If you buy through these links, we may earn a small commission.
Previous Story
Here are all the prices for Samsung’s newest 8K and 4K QLED TVs (Updated)
Next Story
Samsung’s new S60T soundbar is wrapped in premium Kvadrat textile and uses horn speakers to create room-filling sound