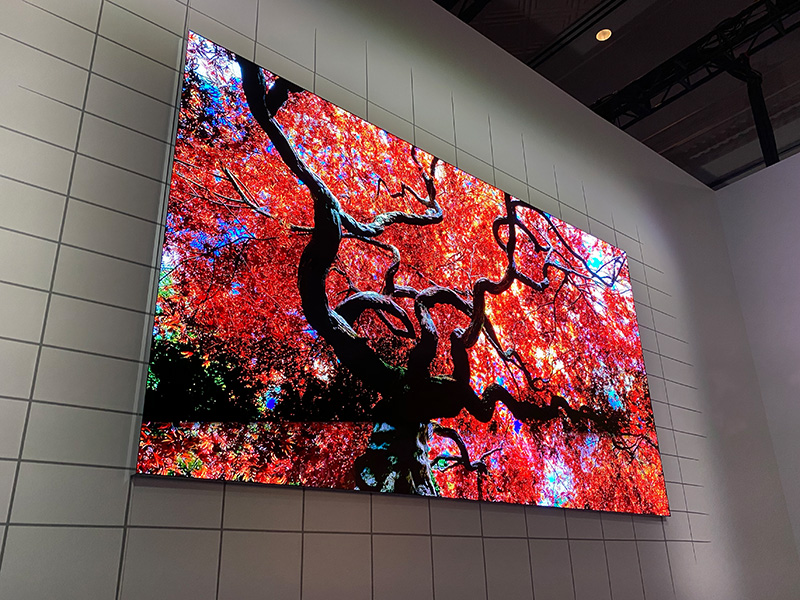 For some background, Samsung has been investing heavily on MicroLED for a few years now, which is the chief reason the Korean company has been reluctant to explore large-size OLED panels for its TVs.

As its name suggests, MicroLED uses super-duper tiny LEDs (each with its own RGB sub-pixels) to create the picture. Because these LEDs can generate their own light, like OLED, MicroLED has no need for a backlight and is thus capable of those inky blacks that OLED is so famous for.

At the same time, like traditional LED-lit LCD TVs, MicroLED TVs can go very bright, which is great for bright room use and HDR content. Since the material makeup is inorganic, MicroLED should last very long (up to 100,000 hours) and have no risk of burn-in, two shadows that have been looming over OLED for years. And since no colour filters are involved, purer colour reproduction is also expected. With all the goodness of LED and OLED screen tech and seemingly none of their weaknesses, I can understand why Samsung is so pumped up for MicroLED and keeps calling it the future of TV.

But because this is still very new tech, MicroLED remains super-difficult to manufacture — which translates to very limited options in the market and extremely high prices. At present, when one talks about MicroLED, the first image that comes to the mind is probably Samsung’s The Wall, a modular display that makes use of several MicroLED panels to form its final size and aspect ratio. For instance, The Wall Luxury that’s now available in Singapore can go from 73 inches in 2K resolution all the way to 292 inches in 8K.

But back to the new lineup. Moving forward, Samsung is making both fixed size and modular MicroLED TVs, with the former designed for the consumer market. Size-wise, the company says anything above 100 inches will be modular and anything from 70 to 100 inches will be fixed — as in you can’t add more MicroLED panels down the road to make the TV bigger. At its First Look event earlier today, the company has unveiled its very first MicroLED lineup that includes six screen sizes: 192 inches, 150 inches, 110 inches, 93 inches, 88 inches and 75 inches.

All that said, Samsung hasn't revealed when its smaller B2C MicroLED TVs would arrive in stores. The best answer I managed to get is "later this year", which I suspect to be closer to 2H than 1H of 2020. Pricing isn't revealed either — but to give you an idea, a 146-inch The Wall Luxury already costs S$500,000.

Join HWZ's Telegram channel here and catch all the latest tech news!
Our articles may contain affiliate links. If you buy through these links, we may earn a small commission.
Previous Story
Samsung’s latest QLED 8K TVs use deep learning to improve 8K upscaling quality
Next Story
SanDisk unveils its 8TB portable SSD prototype at CES 2020