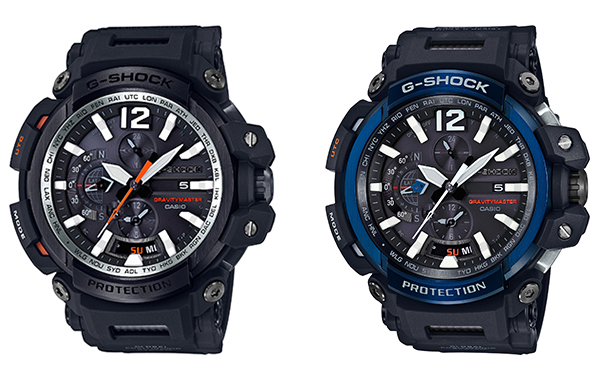 Casio has just announced a new model to its Gravitymaster collection called the G-Shock GPW-2000.

The G-Shock Gravitymaster GPW-2000 is unique because it is the first G-Shock to feature Casio's new 3-way time sync system.

With the new 3-way time sync system, the G-Shock Gravitymaster GPW-2000 can automatically sync the time in three ways: using radio waves from six timekeeping stations around the world, GPS satellite signals, and finally, via Bluetooth with a smartphone.

Using the 3-way time sync system, the G-Shock Gravitymaster GPW-2000 can automatically adjust its time to account for location and will even take into account daylight savings time.

Like any other G-Shock, the new G-Shock Gravitymaster GPW-2000 was built to withstand the elements. It features Triple G Resist that makes it almost impervious to centrifugal forces, shock, and vibration.

The watch case and band are both made out of ultra tough resin that has been reinforced with carbon fiber. And the watch also features Tough Solar technology, allowing it to recharge using solar energy.

Other features include a chronograph, alarm, world time, and countdown timer.

Join HWZ's Telegram channel here and catch all the latest tech news!
Our articles may contain affiliate links. If you buy through these links, we may earn a small commission.
Previous Story
Geekbench scores reveal specs of Xiaomi's upcoming Mi 6 phone
Next Story
The Nintendo NES Classic Edition may soon become a collector's item