G-Shock has just launched its new Street Utility collection with "colours of streetwear".

I'm no fashionista but the use of camouflage prints and muted colours seem to be a huge thing in streetwear fashion right now, so these models are actually very on point.

The collection includes some of G-Shock's most popular models, including the GA-2100 that you seen above.

The Street Utility GA-2100 will come in colourways: black on yellow, camouflage on black, and black on olive green.

The GA-2100 is notable for its octagonal bezel and being one of, if not the slimmest G-Shock.

It also has a Carbon Core Guard Structure where the module is protected by a case made out of resin embedded with carbon fibre.

The G-Shock GA-2100 Street Utility collection is priced starting at S$169. The black on olive green and black on yellow models are S$179.

Next up we have the DW-5610SU, which is based on the first-ever G-Shock and is one of G-Shock's most popular square models.

This also comes in three colourways: camouflage on khaki, black on olive green, and black and black. 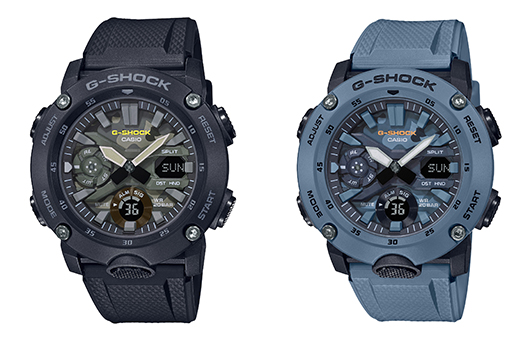 Finally, we have the GA-2000, which also features a Carbon Core Guard Structure like the GA-2100.

Here, we have two colourways – black and monochrome blue – both with camouflage dials.

These two watches are priced at S$199.

Join HWZ's Telegram channel here and catch all the latest tech news!
Our articles may contain affiliate links. If you buy through these links, we may earn a small commission.
Previous Story
PSA: Securing Zoom or any other video conferencing app
Next Story
Samsung to discontinue S Voice on 1 June