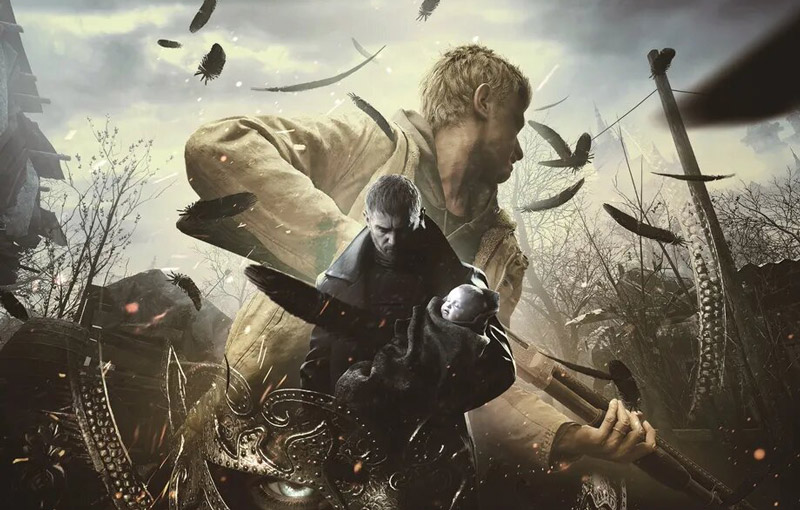 Capcom held a new Resident Evil Showcase earlier today, which celebrated the franchise’s 25th anniversary by giving fans a sneak peek at multiple Resident Evil projects in the works. The big highlights are new trailers for Resident Evil Village and the upcoming Netflix series Resident Evil: Infinite Darkness, plus a Dead by Daylight crossover reveal. Let’s run them down!

Thankfully, the new story trailer doesn’t spoil too much. We get a better look at the wide breadth of Resident Evil Village’s environments, which range from snowy villages to a castle filled with vampires. For some reason, Ethan Winter’s arrival in this strange place has been greatly anticipated by its populace. Everyone greets him by name, super excited to murder the poor guy. At the end of the trailer, we see Ethan face Chris Redfield. The former Resident Evil protagonist went rogue and murdered Ethan’s wife Mia, and Ethan demands that he, “finish the job.”

Next, Capcom revealed that Resident Evil Village will see the return of a beloved game mode from the franchise: The Mercenaries. This lets you replay parts of the game in more arcade-y fashion, with a focus on speed and escalating difficulty. Game director Morimasa Sato noted that Mercenaries has been changed up for this game, too.

Special abilities are also scattered around the map, giving players buffs like increased movement speed and health recovery when attacking. The Duke’s Emporium, an in-game shop from the main game will also be available in Mercenaries for players to buy items and weapon upgrades from. You’ll have to fight through zombies at breakneck pace to beat a ticking clock, and Capcom have confirmed that a ‘special reward’ awaits players who manage to beat the final stage. 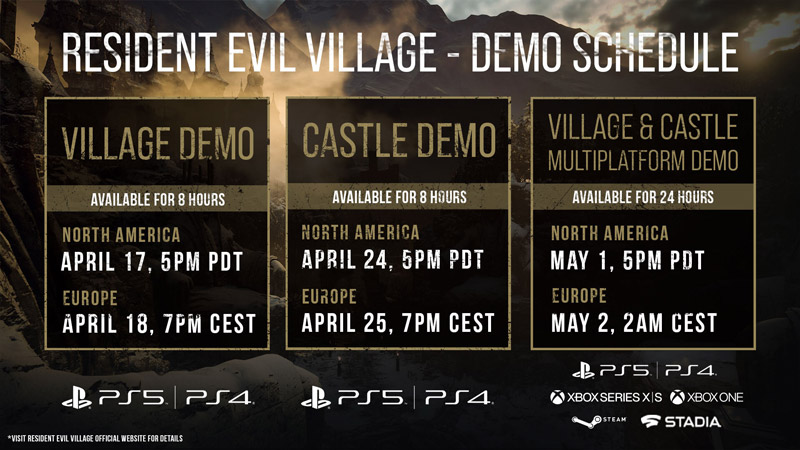 We’re also getting another demo for Resident Evil Village, and it’s a lot more meaty this time. Players will get to explore both the ‘Castle’ and ‘Village’ environments for a limited time, fending off zombies while they scope things out for story tidbits. PlayStation 4 and PlayStation 5 users will get to play the demos earlier in April, and can even pre-load the ‘Village Demo’ right now before it’s playable tomorrow. The demos will then be available on Google Stadia, PC, Xbox One and Xbox Series X in May. You can check out the fairly overcomplicated demo schedule above.

After getting the next Resident Evil game out of the way, Capcom went back to an old classic. Oculus, Capcom and game studio Armature are working together to make a Resident Evil 4 VR remake for the Oculus Quest 2, fully playable in first-person. The graphics aren’t getting a big update, but it looks like gameplay is being changed up to fit the new VR controls. Check out early footage from the game below:

The Resident Evil Showcase also gave us a new trailer for Netflix’s upcoming CG-animated series Resident Evil: Infinite Darkness. The show brings back Nick Apostolides and Stephanie Panisello to reprise their roles as Leon S. Kennedy and Claire Redfield from the Resident Evil 2 remake, and the story involves yet another zombie outbreak. Watch the trailer below:

Lastly, the showcase revealed that Resident Evil will soon cross over with the horror-survival game Dead by Daylight. More information will come later, but we will likely see an iconic monster and hero from the franchise join the game, since that's how most of these crossovers go. Dead by Daylight's gameplay involves a team of humans working together to survive against a monster in a map filled with torture devices, and the game has become chock-full of iconic horror characters like Pyramid Head, Michael Myers, Leatherface, Freddy Krueger and more.

Mr. X or Nemesis would be a good pick for the monster, while Jill Valentine or Leon S. Kennedy would make a great survivor character. We’ll have to wait and see!