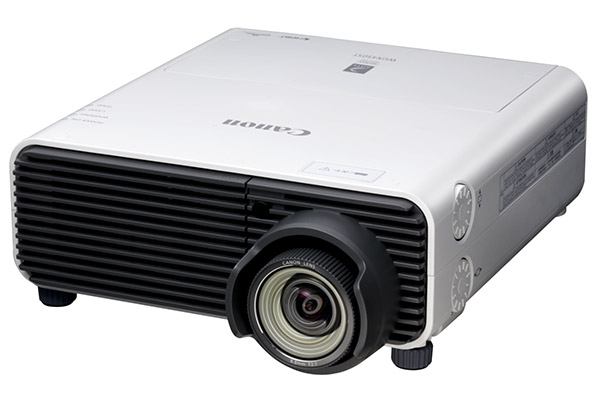 Canon has today announced the launch of its newest short throw projector, the XEED WUX450ST LCOS (Compact Install Model). Sporting WUXGA resolution (1,920 x 1,200) and a brightness of 4,500 lumens, this LCOS (liquid crystal on silicon) projector is also equipped with a 1.35x optical zoom lens, with a short throw ratio of 0.56:1, and a 0 to +75% vertical lens shift (manual) function. This combination of features makes the WUX450ST ideal for a wide range of markets, including higher education, museums and galleries, corporate institutions, and for applications such as simulation, training, or digital signage.

Here’s a list of its key features with more details:

Genuine Canon lenses - Using a combination of dual-sided aspherical and ultra-low dispersion (UD) lens elements, and a wide aperture of F2.7, users can easily project sharp and clear images even on curved surfaces.

High brightness - The AISYS optical engine ensures up to 4,500 lumens brightness and a native contrast ratio of up to 2,000:1.

Advanced image adjustments - Users can easily tweak dynamic gamma, memory color correction, and the 6-axis color adjust (i.e., fine-tuning of the hue and saturation of each primary and secondary color) settings to achieve their desired output.

Ease of installation - The projector is equipped with a 4-point Keystone Correction function, allowing users to independently adjust the corners of the image. Also, an Edge Blending feature enables projection of one seamless, large image from multiple projectors. 360-degree vertical installation is also possible, and fan speed can be adjusted.

The XEED WUX450ST is now available at Canon, at the recommended retail price of S$9,600.