When capturing irreplaceable moments, it is important to use a camera that inspires artistic expression in a simplistic format. Canon today announced the expansion of the popular PowerShot A-series with four new compact models, , that allow you to easily capture the moment with creative style. For the first time, three of the PowerShot A-series cameras will have 720p HD video, advanced Smart AUTO including Subject Detection, and Creative Filters including Toy Camera and Monochrome mode, providing an increase in overall convenience and efficiency.

Whether at a concert or taking a bike ride with the family, the Canon PowerShot A3300 IS, A2200 and A1200 cameras now have 32 predefined shooting situations in its advanced Smart AUTO feature, with the new addition of Subject Detection, where a specific object is the main focal point of the image.

Live View Control is another useful facet in these three new models, providing beginners with user-friendly terms for altering features within the camera. Brightness, vividness and color tone, can be quickly adjusted, making it easier for entry-level users to adjust the look and feel of an image.

Ensuring a low-disturbance when capturing photos of a sleeping baby or a wedding ceremony, the PowerShot A3300 IS, A2200 and A1200 models come equipped with a new Discreet Mode. With the press of a button, the camera's auto-focus assist beam, sound and flash are turned off, making it easier to capture a photo without unnecessary sound or distractions.

For consumers who are transitioning from film to digital, another great feature is the Optical View Finder found in the PowerShot A1200 model. The Optical View Finder offers an easy way to frame shots on a sunny day and is a good option to conserve battery power. Another technology to compensate for potential camera shake, the PowerShot A2200, A1200, A800 cameras feature Blur Reduction, helping to reduce image distortion and to ensure crisp photos. Both the PowerShot A3300 IS and A2200 come equipped with 720p HD video. The Canon PowerShot A3300 IS is available in five vibrant colors - grey, red, blue, silver and pink and features a 16.0-Megapixel CCD sensor along with a 5x Optical Zoom with Optical Image Stabilizer, a wide angle 28-140mm equivalent lens and 3.0-inch LCD screen. The PowerShot A2200 Digital camera has a 14.1-Megapixel CCD sensor, 4x Optical Zoom, a wide angle 28-112mm equivalent lens along with a 2.7-inch LCD screen and comes in black, blue, silver and red. 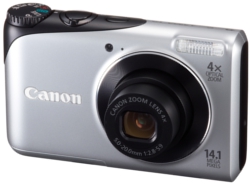 Canon PowerShot A1200 and A800 Digital Cameras: The Canon PowerShot A1200 Digital camera features 720p HD video and an Optical View Finder. The PowerShot A1200 Digital camera also includes Canon's basic and easy-to-use mode dial, a 12.1-Megapixel CCD sensor, 4x Optical Zoom, a wide angle 28-112mm equivalent lens and a 2.7-inch LCD screen, AA battery-powered and is available in both black and silver. For the value-conscious consumer, the PowerShot A800 will offer a 10-Megapixel CCD sensor in addition to 19 Smart AUTO scene modes, a 3.3x Optical Zoom with a 37-112mm equivalent lens, a 2.5-inch LCD screen and AA battery-powered.

Join HWZ's Telegram channel here and catch all the latest tech news!
Our articles may contain affiliate links. If you buy through these links, we may earn a small commission.
Previous Story
LG Introduces World's Largest Full LED 3D TV at CES
Next Story
Rocstor Launches a Series of External Storage Products