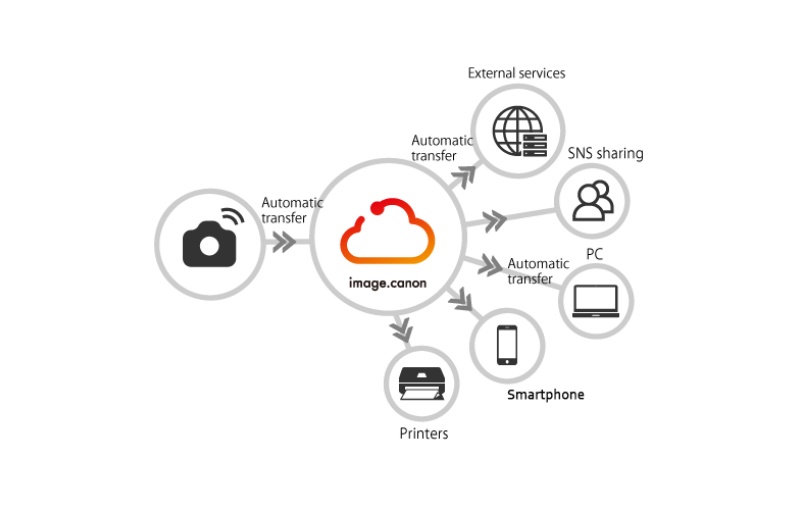 Canon announced today the launch of image.canon, a new cloud platform that connects Canon cameras with users’ PCs, smartphones and external web services and makes possible the transfer of image files between them.

image.canon enables users to automatically upload image and video files in their original quality straight from cameras equipped with automatic image transfer functionality, such as the currently-in- development EOS R5, via Wi-Fi.

Set to begin in early April 2020, users will store uploaded images and videos files for up to 30 days. After the 30-day period, users can opt to continue storing the uncompressed data by migrating it to a 10GB long-term storage account. Any file, including thumbnails, which the user does not access via image.canon for an entire 1-year period will be deleted from the service.

image.canon will make it easier for users to store and share their images. From its launch at the start of April 2020, the service will make possible the automatic transfer of images to users’ accounts on such services as Google Drive. Starting from June, image.canon will expand both its partnership with Google to include original quality backup with Google Photos via Google One, a membership plan for expanded storage, and its partnership with Adobe Creative Cloud (membership plan).

image.canon will be a free service for users of Canon imaging products. Even the 10GB long term storage will be free for the period of use. There is unfortunately currently no way to increase storage capacity beyond the current 10GB should users need more space.

For more information, users can refer to these FAQs.

Join HWZ's Telegram channel here and catch all the latest tech news!
Our articles may contain affiliate links. If you buy through these links, we may earn a small commission.
Previous Story
Samsung unveils 870 QVO SATA SSDs, available in capacities up to 8TB (Updated!)
Next Story
Lamborghini's radical Sián hypercar goes topless