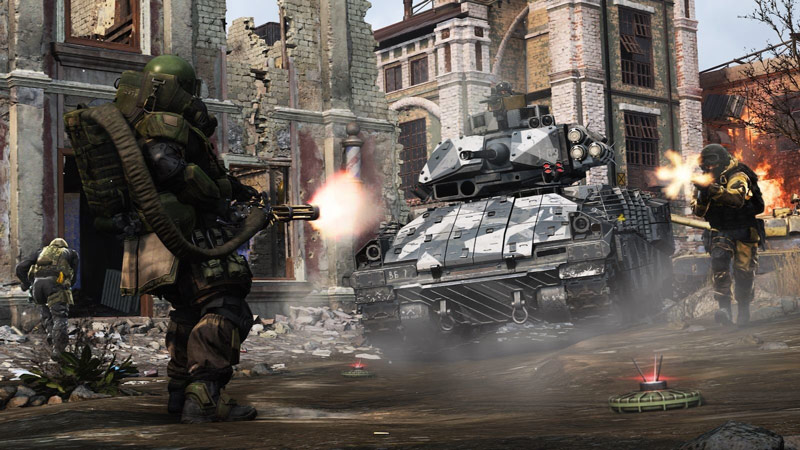 No Battlefield this year? No problem. Call of Duty: Modern Warfare is stepping up to the plate with a new Ground War mode with 64 players and multiple objectives.

It looks like Call of Duty fans can look forward to an incredibly varied multiplayer experience this year. Players can go 2v2 in the recently revealed Gunfight mode, or take to the streets in Ground War. This game mode can hold up to 64 players (although Activision has earlier stated that it could also support 100 players) and takes place in a war-torn city.

According to Game Informer, Ground War has players duke it out to take control of five objectives across a massive map. Players can also take control of vehicles such as helicopters and APCs to do so, resulting in some incredibly chaotic gameplay.

This game mode sounds very similar to what Battlefield is notably famous for, big sandbox maps with vehicles and a high player count. Unlike Battlefield however, Ground War will not feature character classes, such as medics or assault characters.

Instead, players can make use of the game’s extensive weapon customisation system. Each of the guns in this game can carry up to 5 attachments (out of 60 different options), which allow players to personalise their guns however they like.

Honestly, as a big Battlefield fan, this is exactly the competition that it needs. It’s been tough for Battlefield V, with content droughts that can span months, and most matches being filled with various annoying bugs and glitches.

Modern Warfare appears to be stepping in this year to claim the big Battlefield-style gameplay the series is known for, resulting in an immensely attractive multiplayer mode. At any rate, fans of Call of Duty are about to experience something brand new to the franchise with Ground War.

Hopefully Activision doesn’t ruin that by pumping microtransactions into the game a month later.

Join HWZ's Telegram channel here and catch all the latest tech news!
Our articles may contain affiliate links. If you buy through these links, we may earn a small commission.
Previous Story
Gamescom will show off game announcements and new Death Stranding footage
Next Story
Google to reveal more games at the next Stadia Connect Event