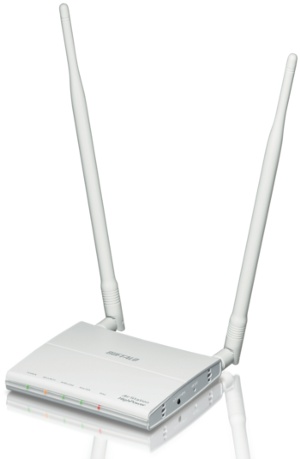 A wireless-N router and access point for homes and small offices, it has the ability to boost Wi-Fi ranges up to three times, without compromising on power consumption. With integration of the HighPower technology, it serves to decrease dead Wi-Fi spots by increasing download speeds by up to six times. It also works as an extender/booster to expand wireless coverage with any router. Encased in a pearl white chassis, the compact AirStation HighPower weighs a mere 210g.

The AirStation HighPower retails for S$59 and is backed by a 3-year warranty.

Singapore - Buffalo Inc launches the latest AirStation HighPower, a Wireless-N router and Access Point for the home and small office. A catalyst for exceptional download speeds and the ability to boost Wi-Fi ranges up to 3 times, it also appeals aesthetically with its sleek, slim minimalist design. The AirStation HighPower sets itself apart from its competitors with its eco-friendly nature, reducing up to 28% of energy consumption and other user friendly features to fit all lifestyles.

With Buffalo’s HighPower technology, the AirStation HighPower provides high performance, powerful data transfer in the home or small office. It serves to eliminate or reduce dead Wi-Fi spots in the environment by increasing download speeds by up to 6 times (and 3 times an increase in Wi-Fi range compared to the previous AirStation). The router even works as an extender/booster to expand wireless coverage with any router regardless of brand. This allows for smooth wireless transmission of videos and music between personal computers, MacBooks and mobile devices, anywhere in your home or small office.

Setting up the router is as easy and seamless as the high speed streaming that comes with using the router. The router setup uses a web-based setup wizard, without the need for a CD. A personal ‘Admin Card’ with a unique individual SSID code comes upon purchase of the router. Connect the router to the computer and modem, simply input the SSID and the router is ready for use. AOSS technology for one button setup with enabled devices and Android smart phones

The Buffalo proprietary AOSS (AirStation One-Touch Secure System) detects all AOSS enabled devices and clients, configures them to the highest level of security possible for both router and device. The AOSS also works with Android technology including mobile smart phones, for uninterrupted, quicker streaming of high definition media.

Eco-friendly technology saves up to 28% in energy consumption

The AirStation HighPower can be set to suit your different lifestyles and reduce energy consumption up to 28%. Featuring an “Eco-Mode” that allows you to programme the AirStation to shut down during stipulated time-belts when the house or office is unoccupied and automatically turn itself on when needed. The AOSS button also allows you to immediately switch on your router in the event you find yourself at home or in the office during these times.

Compatibility with both Windows and Mac OS

Unlike some brands that can only be setup with certain Windows operating systems, the AirStation HighPower is compatible with operating systems ranging from Windows 2000 to Windows 7 and Mac OS 10.4 to 10.7.

At a mere approximate length of 12cm and 2cm in thickness, the AirStation HighPower is compact and sleek. The Pearl white chassis is stylish and chic, blends effortlessly into any environment, and would match any Apple setup perfectly. At only 210g, the lightweight can be placed on shelves or higher areas without any worry.