BlizzCon 2019: Here's everything we know about Diablo IV

BlizzCon 2019: Here's everything we know about Diablo IV 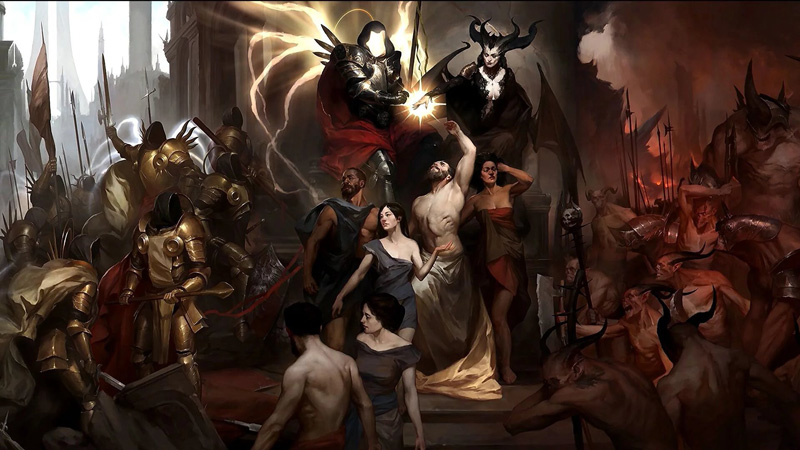 Blizzard Entertainment isn’t quite done with Diablo IV yet, even after its massive announcement earlier today at BlizzCon 2019. At the Diablo IV: Unveiled panel, Blizzard revealed more information on the game.

The game takes place decades after the events of Diablo III. Humanity and heaven itself have suffered great losses, with heaven forced to close its gates. Mankind has been shut out, and left on their own.

This particular slice of hopelessness is right when Lilith makes her triumphant return. She is Mephisto’s daughter, and represents a link to an even greater threat - suggesting that she’s a mere stepping stone to a bigger antagonist.

On the gameplay side, Diablo IV remains a classic isometric hack-and-slash action-RPG, a genre that the original game defined, and features an incredibly grim, non-linear campaign. The game will contain a shared open world with five distinct regions, along with a weather and day/night cycle. As usual, this open world will be littered with hundreds of dungeons and legendaries to find and loot.

The five regions have unique biomes and geological features, with social hubs like villages and towns where players can meet each other and receive quests. Diablo IV can be completed without ever engaging with social abilities, and players can always go to the new PvP zones if they don’t like making friends.

Dungeons are still randomised, and exterior dungeons are randomised as well. They’re incredibly dark, keeping players on their toes. Players will still be able to go to hell - but we didn’t get a close look at that yet.

Three classes were revealed for the game - Sorceress, Barbarian and Druid, but there will be five classes in total at launch. The barbarian will arrive with the Arsenal System, featuring four weapon slots and allowing players to use one-handed and two-handed weapons in the same build.

Items can be assigned to each skill slot, and the barbarian will automatically pull out the weapon they need depending on what skill players use. On the druid side of things, the team has replaced fire magic with storm and earth magic, stating that fire magic didn’t feel very in-tune with nature.

Pets will make a return of course, alongside a mechanic named ‘seamless shapeshifting’. Players can assign a form to each attack, and their characters will seamlessly transform during the attack in mid-swing. The sorceress on the other hand will bring fire and ice spells to the battle, and light up dark dungeons.

Customisation is a bigger thing in Diablo IV than it’s ever been in the series, with the game allowing players to fully customise their characters. Hair, skin, scars, jewellery, tattoos and more can all be customised, along with the usual talent trees, skill ranks and runewords.

Mounts will be in the game and are also customisable, with changeable armour pieces, saddles and trophies. These equipment pieces can influence speed, damage resistance and more, so they’re not just cosmetic.

Blizzard promises that the game will have more legendaries than ever before, so here’s hoping! The game director made sure to note that everything we saw today won’t be coming anytime soon though - so we might have a long wait on our hands. Diablo IV will be released on PC, PlayStation 4 and Xbox One, though we don't have a confirmed releae date.

Join HWZ's Telegram channel here and catch all the latest tech news!
Our articles may contain affiliate links. If you buy through these links, we may earn a small commission.
Previous Story
Microsoft's new Edge browser logo no longer looks like Internet Explorer
Next Story
BlizzCon 2019: What we know about Overwatch 2 in a nutshell