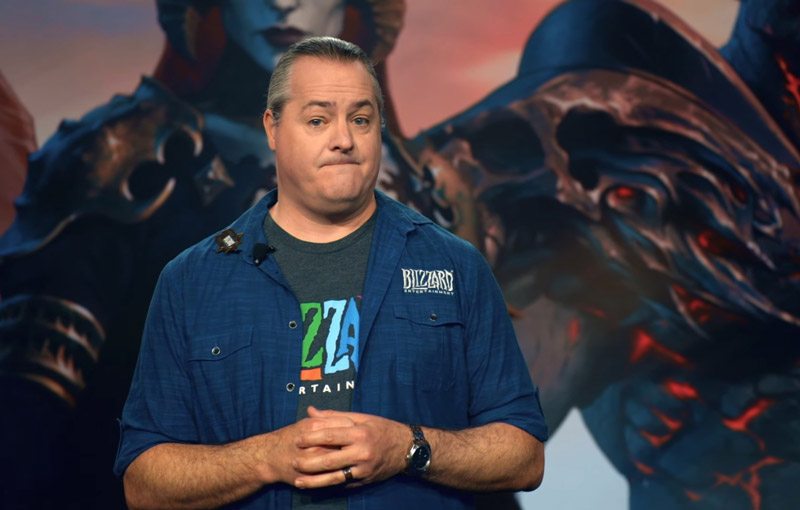 He probably won’t be the last to step down, either.

Head of Blizzard Entertainment J. Allen Brack has stepped down from his role to, “pursue new opportunities.” Activision Blizzard announced that the company will now be co-led by Jen Oneal and Mike Ybarra, following his departure as president.

Brack is leaving after having spent 15 years at Blizzard, and acting as its president since October 2018. Before that, he led the World of Warcraft development team. Blizzard’s official announcement post focused more on its new leadership, but included a statement from Brack as well:

I am confident that Jen Oneal and Mike Ybarra will provide the leadership Blizzard needs to realize its full potential and will accelerate the pace of change. I anticipate they will do so with passion and enthusiasm and that they can be trusted to lead with the highest levels of integrity and commitment to the components of our culture that make Blizzard so special.

Oneal previously led Vicarious Visions, the studio working on the upcoming Diablo 2 remaster. Ybarra acted as corporate vice president for Xbox Live and Xbox Game Pass before joining Blizzard in 2019. The post states that the pair will now, “share responsibilities over game development and company operations.”

Blizzard Entertainment has been the center of a whirlwind of controversy recently, all of which escalated greatly when Activision Blizzard was sued by the California Department of Fair Employment and Housing for gender-based discrimination and sexual harassment, among other things. The company responded that the lawsuit consisted of, “distorted, and in many cases false, descriptions of Blizzard’s past,” in a statement.

To protest the company’s response, more than 2600 current and former employees signed an open letter to support the lawsuit, and later walked out of work. Earlier today, a class-action lawsuit was filed against the company on behalf of its investors, due to the company allegedly withholding information regarding its issues with sexual harassment and dsicrimination. Blizzard’s head of human resources, Jesse Meschuk, has also left the company.

Employees of Activision Blizzard have now formed a coalition, condemning the law firm that CEO Bobby Kotick chose to review the company.

Join HWZ's Telegram channel here and catch all the latest tech news!
Our articles may contain affiliate links. If you buy through these links, we may earn a small commission.
Previous Story
The Apple Arcade is expanding its roster with Capcom's Monster Hunter Stories, a new Layton title and more
Next Story
Disney+ is getting a spooky Lego Star Wars Halloween special in October