Incorporating the Intel SNB-E processor with LGA 2011 socket along with the X79 chipset, the BIOSTAR TPOWER X79 has extreme overclocking capabilities. 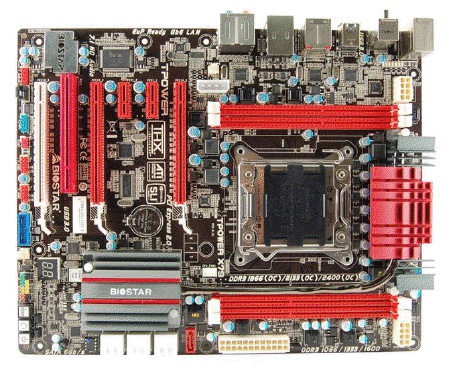 This board from BIOSTAR reminds us of the ASUS P6X58D-E in terms of its PEG slots layout and glaring lack of support for PCIe Gen 3. This makes the TPOWER X79 seem lacking in the field of fierce competition. Even ASRock X79 Extreme4 M microATX motherboard supports PCIe Gen 3. We have previewed X79 boards from ASUS and MSI. We have also offered sneak peeks at X79 offerings from Gigabyte and ECS as well in this increasingly crowded playing field.

This board will find its niche with upgraders and rig-builders who have already invested in high-end PCIe 2.0 discrete graphics cards. The TPOWER X79 even has a full-length PCI slot for any legacy expansion cards. Such value-for-money proposition from BIOSTAR is what makes its offerings appealing to users who prefer to take a wait-and-see stance before investing in boards that are PCIe Gen 3 compliant.

BIOSTAR proudly announces the TPOWER X79 motherboard aimed at the most demanding over-lockers and enthusiasts.

The extension slots consist of three PCI-E x16, two PCI-E x1 and one PCI; and CrossFireX, SLI and PCI-E 2.0 support.